Posted on May 01 by Allison Dupree

It was January 2012. Little did I know as I walked into the training center’s classroom with my oversized BDUs and clunky hand me down boots, that I’d be assigned to sit next to my future father-in-law. And I certainly never thought that his son, the tall, skinny boy with the most contagious smile sitting rows behind me would become my future husband. But what can I say, you never know what life has in store for you.

After graduation from EMT school in June 2012, I kept his phone number safely in my contact list and the thought of him kept popping back into my mind now and again. While only a handful of words were exchanged throughout the 6 years after EMT school, I could never quite shake the idea of seeing Charlie again. In November of 2016, I couldn’t take it anymore. I knew I had to see him again. So I spontaneously texted him under the desk during a class and asked to meet up after all these years. I was at least hoping to rekindle an old friendship and grab a few drinks, but he proposed something a little more elaborate. I was thrilled and couldn’t believe Charlie Brown was asking me on a date! On our first date I found out that during our entire time apart he was thinking of me too! Even though we never said it out loud, we both hoped to be together one day as more than friends. That night we spent 8 hours together and we never wanted that night to end. Although all grown up (and much cuter) by now, inside, he was exactly the same bright eyed guy with a clever joke to make after every story. We still wonder and joke about what our lives would have been like had he not changed his phone number and “forget to tell me” years ago, or had we met up sooner, but we also know that those 6 years in between seeing each other gave us time to grow as people and learn about being in relationships.

Looking back now, if I could go back in time I wouldn’t change a thing. I know that God had a plan for me and knew that had we been together sooner, I wouldn’t have been ready to love him as fiercely and fully as I do now. We are both in the perfect place in our lives to love each other with everything we have where as that might not have been the case 6 years ago. Now that we have found our way back to each other, we know that this love was always meant to be and we’re never leaving each others side again On the beach in Cape May 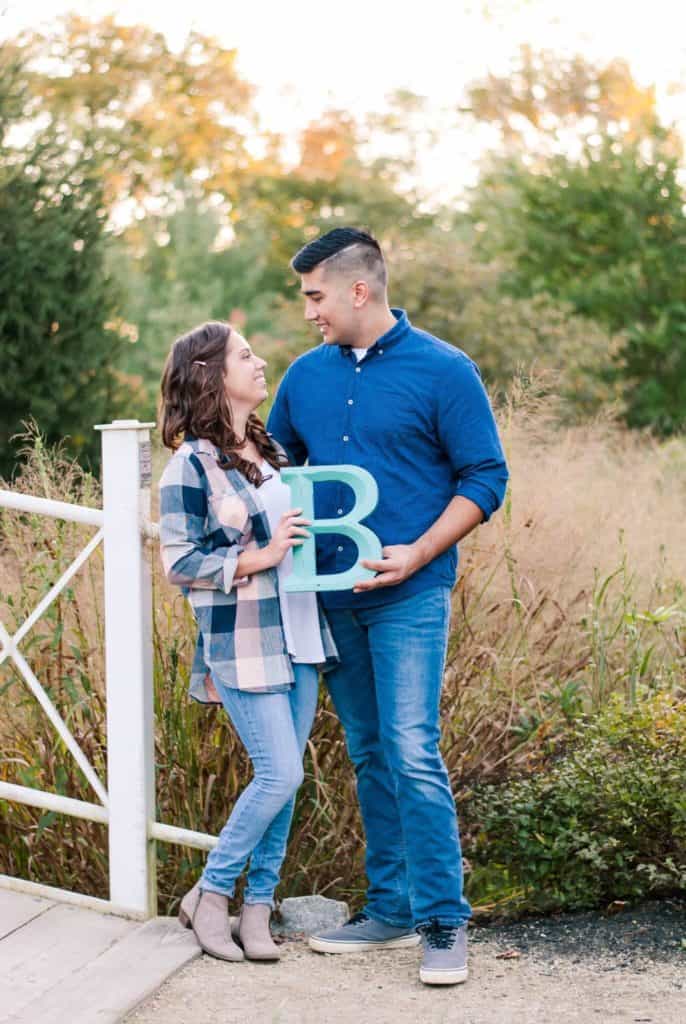 Charlie and I had been talking for a while about getting engaged so I knew it was already on his mind soon before he popped the question, but I was adamant that I wanted to be surprised for the proposal. Naturally, I can read him like a book and know him very well, so when he mentioned having a fancy dinner and then a walk on the beach at sunset during our summer trip to cape may I thought for sure this was it! It was going to happen! We had an incredible meal at the Ocean Hotel in Cape May, and as we ate dinner I’m thinking more and more about a proposal possibly happening tonight.

These thoughts made me the most nervous and excited I have ever been. I knew I would say yes and I just couldn’t wait for him to ask me! After dinner he suggested that I put my new dress on and that we go to the beach to watch the sunset. . . How romantic! He explained to me that when we first got on the beach he was of course nervous too and was trying to find the perfect place in the sand to ask the big question. I of course did not make this an easy task. . . it was a beautiful night, and with my shoes in my hand I kept running away from him barefoot towards the water to feel the waves hit my toes. Once he finally found the perfect spot Charlie had to hold my hand and keep me from running back in the water so that he could make his big speech. After a few unforgettable words about how much he loved me he pulled the beautiful ring out of his pocket he asked me to marry him. Of course I said “YES!” It was all great timing since right after I said yes a big wave came and started pulling our shoes that we put next to us towards the ocean! I had to break up the romantic moment to run and catch them!

After quickly retrieving our runaway shoes I admired my ring while walking hand in hand with my new fiancé until it was pitch black. Luckily we were able to find our way back to the hotel! My engagement was beautiful, romantic and the little quirks that came along with it made it a moment we will never forget!