Posted on August 31 by Allison Dupree

I began training in Kickboxing at a Tiger Schulmann’s school in Cherry Hill, NJ in Fall 2012. Unbeknownst to me at the time, Tony owned a Tiger Schulmann’s school in Princeton, NJ. I visited his school one day because it was closer to my place of work, and took one of his classes. I was MORTIFIED. He was so intense compared to my other instructor, and it was such a difficult class I swore I would never go back to his school. Fast forward to March 2013, due to a break up I was going to be moving back to my home town in Hamilton, and away from my Cherry Hill Kickboxing school. This meant I’d have to transfer to the Princeton location, and Tony would have to be my instructor. I was very hesitant, and I explained this to my instructor in Cherry Hill (who him and his now wife were both very good friends of mine). His girlfriend, Rachel, was incredibly excited to learn that even though I was leaving them, it was to join Tony at his school. She was determined to set us up, as we were both single. I swore up and down, “absolutely not,” “I need time alone,” “I don’t need a boyfriend”.

Two weeks later we were both invited to a group outing to watch some UFC fights. I was so nervous, I avoided him the entire night. He drove 2 1/2 hours specifically just to meet me on a personal level. After about an hour or so watching fights on opposite ends of the bar, we made eye contact. I, with my astonishing way with words, sighed and realized that I had to get some guts and say hello. I approached him and started with “Well, I had to talk to you anyway….” And the rest is history. 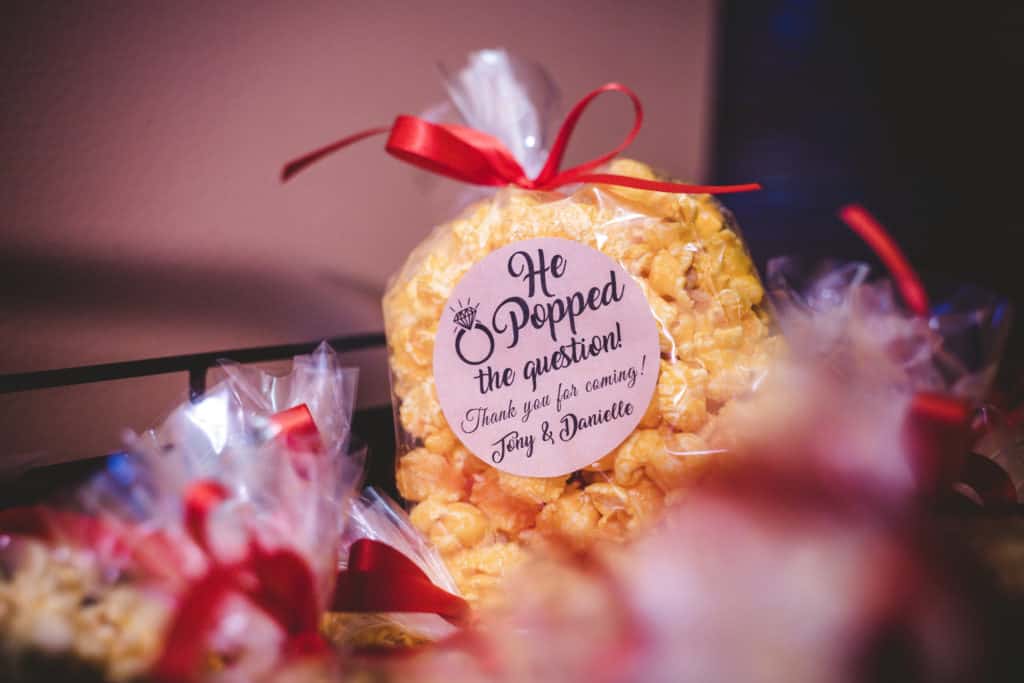 Tony and I now work together. He owns the Tiger Schulmann’s Martial Arts school in Princeton, NJ and I am his school manager. On the day we got engaged we had a birthday party to host at the school. We had some plans to meet friends later that afternoon at the Winery and we were bringing our pups! It was a colder rainy day for June. I failed to tell our other staff member that we had a party that day, so him and I had to run the show, which was successful but busy!

Usually we clean thoroughly after a party but Tony told me he had some people coming in to clean up for us, and we had to get a move on. In my mind, I was thinking it’s gloomy and not a nice day for the winery, why are we rushing! We stop home to change and pick up our pup, Ella and head to the winery. We meet our friends and walk around the outdoor part first, so the dogs would calm down. It had stopped raining at this point, and was rather pleasant out. On our way to walk through the vineyard, our dog had to use the bathroom (because that’s just how our lives are…) Our friends quickly offered to toss away the droppings as Tony and I proceeding to walk down one of the aisles. Now, I had suspicions that our engagement was coming in those weeks, as we had talked about it and he asked me for ring styles. My mom lives in California so she was home for 2 weeks as well. My birthday was the following weekend and I am the worst at surprises. I was convinced that we would get engaged over my birthday weekend. As we’re walking I see a flip of hair peeking out over the hill, which got me thinking there was a large group of family and friends down the way and this was happening. I had mentioned to Tony that it would be special to me if people were there when it happened. As many different scenarios started running through my mind, I look at Tony as he stops walking, and see that he has a box in his had and he started with “So, I had to talk to you anyway”. The flip of hair was a photographer that captured everything, I was over joyed. We spent some time at the winery with our friends, enjoyed a tasting but then everyone had some places to be so we went home. Tony told us we had reservations later that night for dinner, and I thought nothing of it. For my second surprise of the day, he had set up a surprise engagement party for us with all of our family and friends (and our photographer). It was the most beautiful thing anyone has done for me. My sister and mom helped him coordinate favors and goodies, and we got to spend a few hours with so many people we love and don’t get to see often. I am a lucky girl.