Theresa and Justin at the Estate at Florentine Gardens

For Justin and Theresa, it’s always been about the light. The couple married in River Vale on November 23, 2013, at the Estate at Florentine Gardens, a venue they instantly loved for its natural light and romantic feel. “There were candles covering every square inch of the place,” Justin laughs. Justin, originally from Connecticut, found his way to New Jersey for college, where both he and Theresa attended Rutgers University. They met through Theresa’s older sister, Anna. After a year and a half, Justin proposed while on a cruise to the Caribbean. After a formal dinner, he popped the question amid candles and champagne on a private balcony overlooking the ocean. While originally envisioning a much smaller wedding, the list grew to about 200 once they factored in all friends and family. Guest favors included mini-lanterns in organza bags with tags that read “Love Lights the Way” and biscotti (made by Justin’s aunt) in burlap bags. The couple, wanting to keep the evening nature-oriented and sensual, opted for two alternating centerpieces. One included flowers cascading down a tall branch with hanging candles, while the other was a tree growing from the table, with a moss base decorated with flowers and candles. Table numbers were made of paper lanterns. 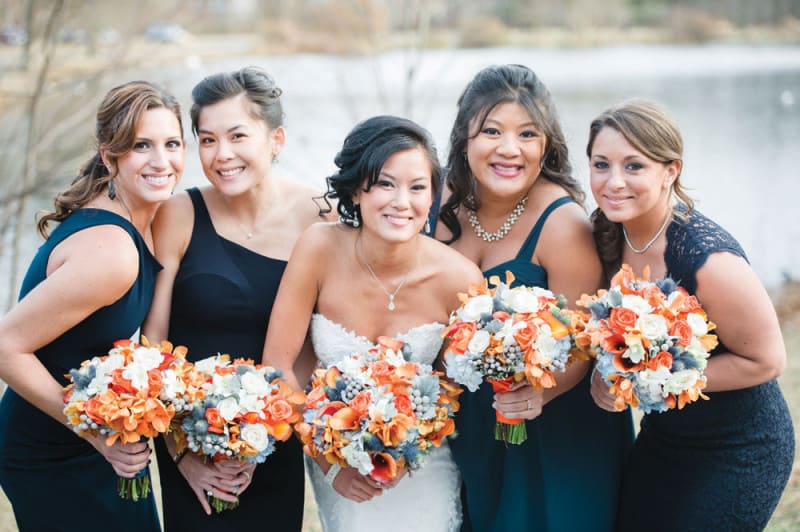 Justin, 31, and his groomsmen were outfitted in navy suits, with navy and orange ties and pocket squares. As for the shoes, Theresa was adamant. “I’m definitely wearing them out! I bought them with the intention that they wouldn’t just be my wedding shoes.” The couple handpicked every song played at the reception—genres ranged from house music to country—and danced their first dance to “Before the Sun,” a song by underground artist Shannon Curtis, who they discovered together. “We’re very into music,” Theresa says, “and the deejay knew exactly when to play each song to get everyone dancing.” The best surprise of the day was during the evening ceremony. While Justin and Theresa said their vows in front of a picturesque window decorated with lights, it began to snow. The flurries—lasting about 10 minutes on the clear November night—seemed destined especially for them. After a mini-moon to Florida and honeymoon to Hawaii six months later, they are at home in Hoboken.

The Estate at Florentine Gardens