Posted on January 11 by Allison Dupree On December 1st, 2011, two colleagues met at a work event. Jorge and Melissa became friends through their work but never did the other imagine their relationship ever going beyond this. Both of them were in committed relationships with other people. On December 5th, 2012 friendship grew into something so much more. At a work conference in Atlantic City, they shared their first kiss. Both reluctant to see what was right in front of them, they danced around defining their relationship. On July 15, 2013 fate changed their lives for good. On their way back from a day in Hoboken Jorge’s Jeep was cut off by a speeding car. Losing control, his Jeep flipped three times, and he was ejected to land helplessly on the Garden State Parkway. Melissa was following behind in her car and watched as Jorge’s body flew through the air and landed hard on the ground in the midnight darkness of the open highway. She thought he was dead. After calling 911, Melissa pulled over and ran to his side as he bled. Eyes closed he told him she loved him for the first time and prayed that God would not take him away. 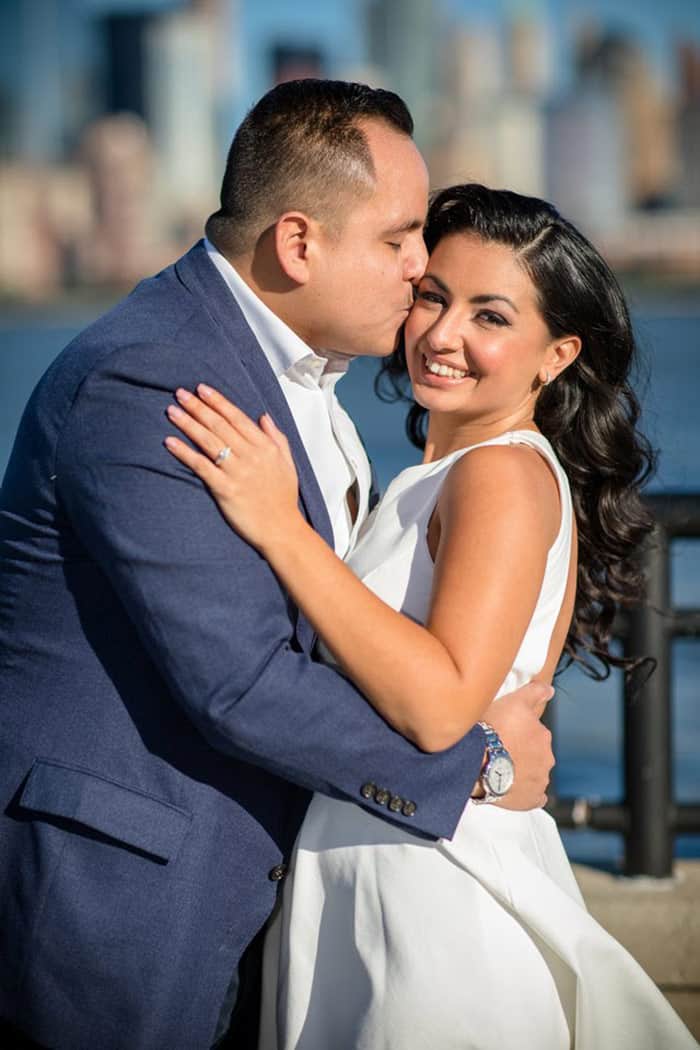 All of their flirting and games were a blur- now all that mattered was him and her. Jorge was taken to the hospital for emergency surgery splitting open his skull, breaking multiple ribs and fracturing vertebrae in his back. Melissa waited alone in the hospital as they rush him away. 4 hours later a doctor walked in, “Is there a Melissa here, Jorge is asking for her.” Melissa ran to his room when it all made sense. The accident on July 15th not only brought him love but brought him into a new family. They are becoming husband and wife on October 20, 2019, but their life together started on that night in July year ago.

When you get engaged? It seems everyone in NJ waits eagerly for Memorial Day Weekend, the unofficial start to summer and the great migration down to the Jersey Shore. This weekend would be especially important as Melissa’s younger brother had just graduated from college, and the family was hosting a celebration during the weekend. Everyone would be there.

Her mother convinced her after numerous phone calls and text messages that it was best if Melissa left early for the shore instead of waiting and arriving with Jorge. The plan was Melissa would help her mom clean and cook for the party and Jorge would meet them at the family’s shore house sometime on Saturday.

Saturday morning at 7:30 AM Jorge gently woke Melissa. As she laid in the bed, eyes still closed, she listened to him whisper “I bought a toy for the summer- come and see.” In an old pair of pajamas, last night’s eyeliner, messy hair, and no shoes Jorge walked a sleepy Melissa out to the deck to see what he bought. What Melissa did not know is that Jorge had been up since 4 AM. He arrived at the shore house at 5:30 ready with balloons, helium tanks and fireworks. Her brother, cousins, grandparents, and parents help him set up “Marry Me” written in balloons on the dock of their shore house (he favorite place).

At 7:45 Jorge escorted her on the deck with her eyes closed. Melissa looked up over the railing to see “Marry Me” written in gold balloons and turned to find her entire family surrounding them and Jorge on one knee. When she said “yes” the fireworks went off in celebration. Tips on what to do when you get engaged.