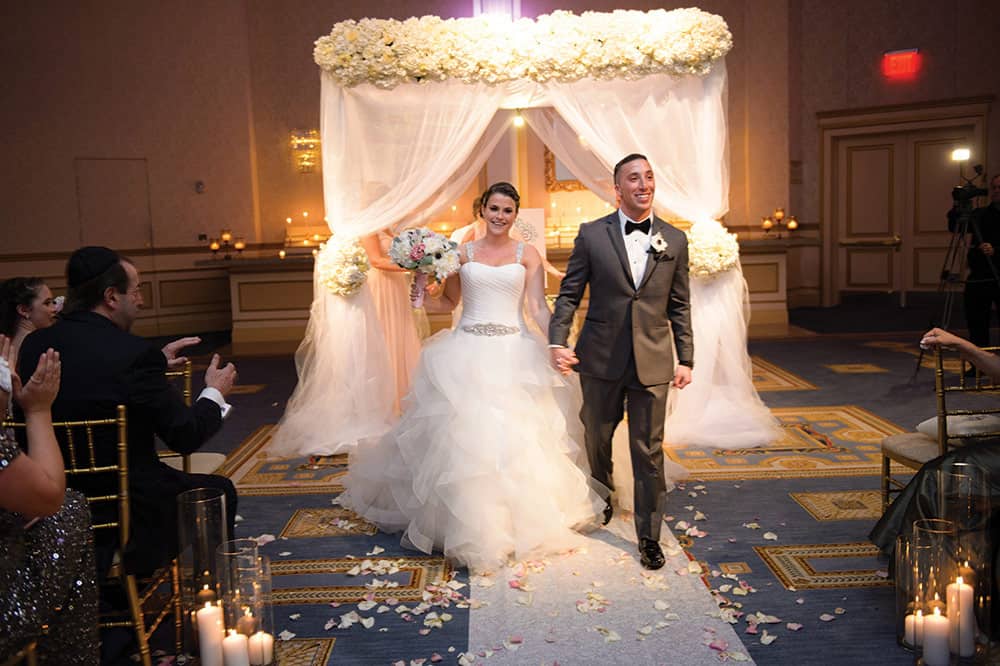 As each group of friends and loved ones walked down the aisle during Christina Blanco and Alexander Baruch’s wedding, a hand-selected piece of music was playing just for them. The Beatles’ “In My Life” played as the groom and his parents, his grandmother and the bride’s mom and brother walked the aisle. An instrumental rendition of “A Thousand Years” played during the bridal party’s arrival. And the bride walked down to an instrumental version of Elvis Presley’s “Can’t Help Falling in Love,” an inside joke between the couple. Christina, who married Alexander on April 9, 2016, at The Grove in Cedar Grove, where she works as senior catering coordinator, chose personalized, nontraditional musical selections for the ceremony that related to those in the processional and was recognizable to the guests. “It was emotional, sentimental, unique and heartfelt,” she says. Choosing the right ceremony music is important because it helps set the tone. “The music is a vital part of the ceremony because it helps people feel the moment,” says Tara Buzash of Sweet Harmony, a Plainfield company that provides special-events musicians. “It supports the bride as she’s walking down the aisle, and I think it gives her courage and makes her feel good.” Scott Hornak of Craig Scott Entertainment in Rochelle Park agrees. “Get creative and put your fingerprint on your wedding,” he says. “This is the time when you can really express yourselves and tell a story.” For a recent wedding last fall at Mallard Island, Hornak had six violins, a cello and guitar at the ceremony. The bridal party started the processional with “Into the Mystic” by Van Morrison, the bride walked down the aisle to “Atlantic City” by Bruce Springsteen, and the recessional was “You Are the Best Thing” by Ray Lamontagne. “I really loved this ceremony because it reflected the bride and groom, and every song had special meaning to them,” Hornak says. Buzash suggests to think about what music really moves you. Couples need about 12 pieces of music that cover everything from the prelude before the ceremony begins, the processional, music for the ceremony itself, the recessional and the postlude, when the guests walk out. A key question is whether you want traditional, classical music or modern love songs? Most people these days go for a mix of both, Buzash says. The trend, she says, is moving away from traditional classical standards as couples embrace more styles of music in their wedding ceremonies like pop music. “People aren’t necessarily expected to have certain pieces of music in their ceremony as they would have 30 years ago,” she says. Some are also finding inspiration in popular culture, like one couple Buzash worked with who selected movie theme songs composed by John Williams and another that had music from the TV series Game of Thrones playing when the groomsmen walked down the aisle. A deejay played the music during the Baruch nuptials. If you choose live music, you’ll most often hear the violin, cello, harp, piano and guitar. “There’s a smorgasbord of instruments to choose from,” Buzash says. “It’s up to you to choose the ones that suit you best. They all have a little different personality.” Keep in mind that not all music, especially indie rock and hip-hop, translates well to those instruments. “Not all of the modern music translates well to strings, especially a soloist,” Buzash says. “Brides need to know that because we want them to love the way it sounds.” —Lisa Flam