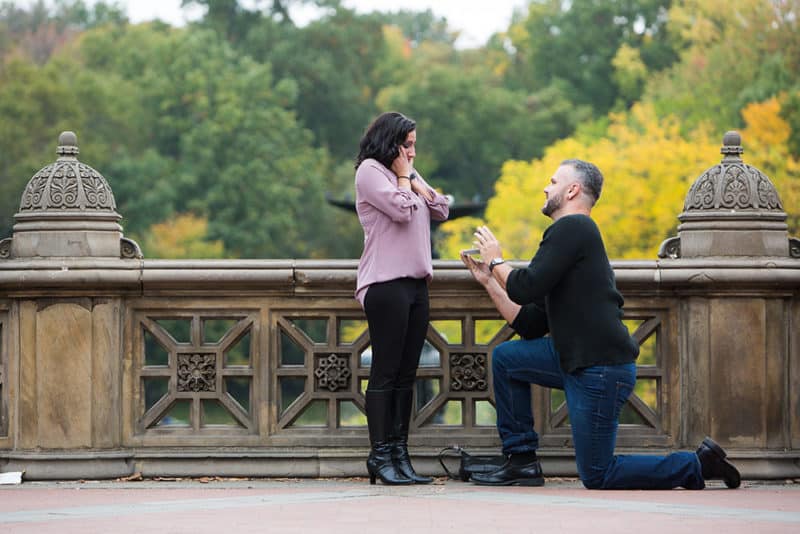 How He Asked: Jonathan knows how much Lindsay loves Jon Bon Jovi and surprised her with tickets to see him in NYC on October 20, 2016. Off to the City they went! Lindsay being a planner, decided they should go into Central Park because Jon has never been there before. Let’s back it up a little to earlier that day… Before leaving the house to drive into the city, Jon’s sock was bothering him so he ran inside to change them really quick. (Changed his ankle socks to LONG dress socks, you’ll find out WHY) Then off to the City. The weather called for rain, therefore Jon brought a long umbrella for walking around Central Park. Once parking in the Icon lot, they headed to the streets to catch a cab. Jon did not want to do much walking, you will find out soon just why. The cab driver dropped them off a little far from where Jon wanted to go. Jon told Lindsay prior about this beautiful fountain he read about and knew she’d like to see. Now they are on their way for a 10 minute walk. Lindsay was taking in the changing of the leaves and Jon was on his phone tending to “business”. They made it to the fountain and started taking pictures and people watching for a bit. Wanting to walk around the Park more, Lindsay told Jon she wanted to walk around. Not wanting to go just yet, Jon needed to be on his phone for his workers had questions. They then walked up a beautiful set of stairs to look over to see the fountain. Lindsay wanted to take a picture, so she grabbed her phone and snapped away. Jon took her phone so they could take a picture together, once the picture was taken… JON GOT DOWN ON ONE KNEE! In utter shock, Lindsay began to cry as he reached into his SOCK to get the ring box! (Now we know why he had to “change” his socks) Still on his knee, four meaningful words finally blurted out of Jon’s mouth “Will You Marry Me?” Covering her face, Lindsay replied with a YES! Still crying, they kissed, hugged, cried, hugged again then Jon turned Lindsay and said, “Now smile for the camera!”. Knowing she wanted to have pictures of the proposal whenever it happened, he remembered and hired a professional photographer to capture everything! The photographer came over, congratulated them, told her to gather herself because they now have an hour proposal photo shoot! Here came more water works from Lindsay (Of course).