Posted on February 20 by Allison Dupree

How did you meet? We started dating back in … wait for it … HIGH SCHOOL. We’ve been together 11 years to date. We were introduced by a mutual friend (and now groomsman) and were instantly drawn to each other’s outgoing personalities, sarcasm and, full disclosure, we were also very attracted to each. We quickly became best friends and, after about two years of friendship, started dating my junior year of high school. 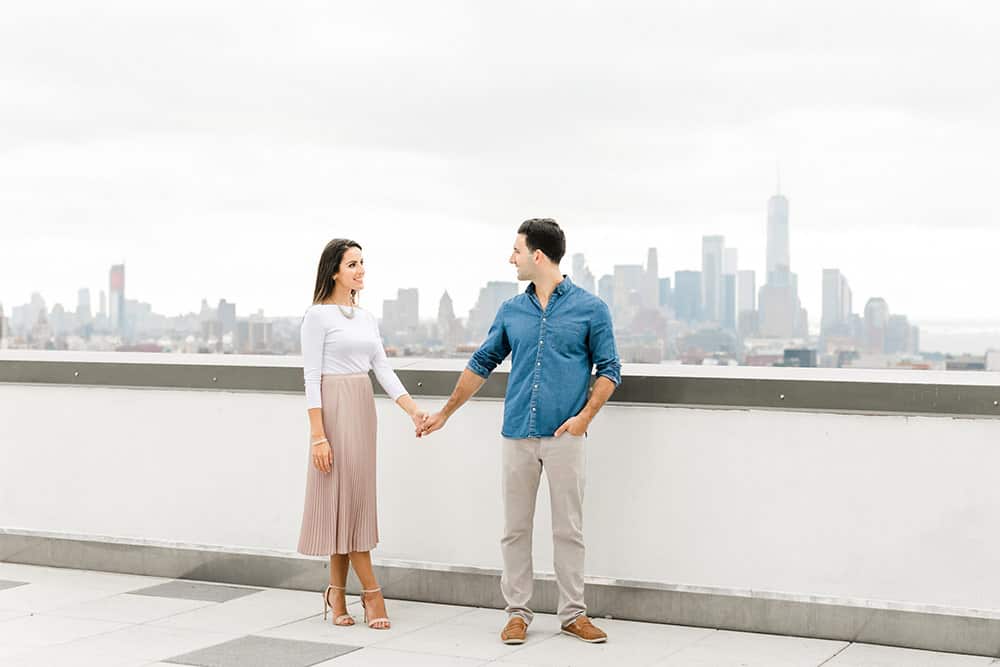 We value each other’s individuality, so we made a concerted effort to give each other enough space to grow: we went to separate colleges (I went to Penn State and Pedram went to Saint Joe’s in Philadelphia), during which time we would visit each other every 2 weeks, and separately studied abroad (I went on Semester at Sea and Pedram went to Spain), during which time we Skyped daily and flew halfway across the world to see each other. I think this sheds a lot of light on the people we are today and on our relationship: adventurous, resilient, determined and, above all, deeply in love. Where did you get engaged? Sussex County Sunflower Maze, NJ Your engagement story: Sunday September 3rd (the Sunday before Labor Day) was the day it happened. Pedram’s mom had texted us and his other siblings a few weeks earlier letting us know that a family friend was having a Labor Day party at a park in Sussex County, NJ and she wanted us all to attend if we could. Pedram left early in the morning that day because he said he wanted to go motorcycle riding with his dad before the party. He often does this, so I didn’t think anything of it. I slept in and took a train from our apartment in NYC to NJ later in the afternoon to get a ride with Pedram’s sister. Funny thing is, I basically complained the entire car ride. “Why is this place so far?” “It’s supposed to rain today, couldn’t they have picked somewhere inside for the party”, and so on and so forth. When we pulled up to the park, I was stunned to see acres and acres of sunflowers staring back at me. I absolutely LOVE sunflowers – enough to quickly stop my complaining, but not enough for me to realize that Pedram was about to propose. 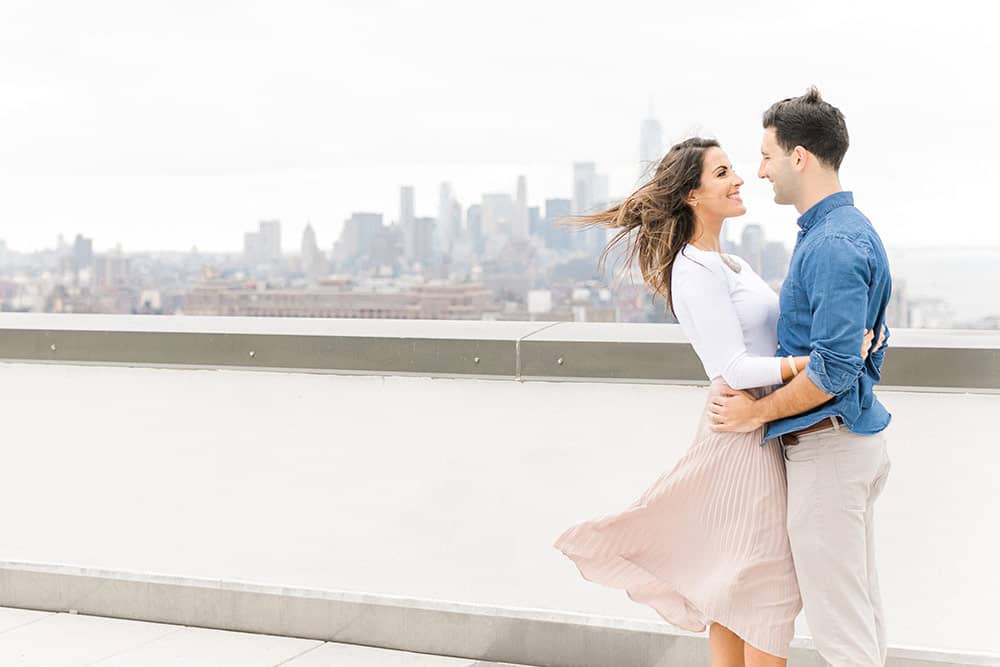 As we walked up to the entrance, Pedram’s sister realized she left her phone in the car. She told me she would go back to get it and that I could go ahead. When I got to the entrance, a very nice attendant walked me to the entrance of the maze, as he told me all about Sussex County Sunflower Maze, how it got started, how many acres they have, etc. I walked through the maze and snapped pictures for a few minutes, before I ran into my best friends (and now bridesmaids) standing a few yards away with a sign that said: “Today Is…”. I was completely shocked. I think I literally said: “What are you guys doing here?”, and then I looked at the sign again and it finally hit me: “Oh my god, THIS is happening!!” I immediately burst into tears – happy tears of course! I basically ugly cried and shook uncontrollably the entire rest of the maze. The second sign (held by our cousins), read: “Beginning of The…”, followed by the third sign (held by our siblings), which read “Rest Of…”, followed by the fourth sign (held by his parents), which read “Your…”, followed by the last sign (held by my parents), which read “Life”. So many emotions! So much build-up/anticipation! Finally, after walking through all of the “Today is the Beginning of the Rest of Your Life” signs, I found him in a secluded part of the maze, on one knee. He was so nervous he could barely get his proposal out. Word of advice for future grooms: apparently sunflowers are only in bloom for 3 weeks of the year! So he had to schedule and re-schedule the engagement multiple times with my family on standby until the sunflowers had fully bloomed. It ended up being perfect though. To top it all off, it was basically raining the entire day right up until I got to the maze, and then the sun broke out for about an hour while the proposal was happening – sounds like a scene in a movie, I know, but it really happened! We basically floated on a cloud through the rest of the day. He had a tent set up with wine and cheese in the maze, and then later on, we went to my mom’s house where he’d set up the entire house for an engagement party (his “motorcycle trip” was really him decorating my mom’s house for the party). More of our close friends and family joined us there to celebrate. It truly was my dream proposal, and I was so happy that my closest friends and family got to be a part of it. I’ve lost count of the number of messages I’ve gotten from people saying it was the most unique proposed they’d ever seen. A month and a half later, after we came back to earth a bit after our proposal “high”, we had a late October engagement session in NYC with our wedding photographer. Pedram and I are both from New Jersey, but we’ve lived together in Manhattan for the last 3 years to be close to where we work – I’m an attorney at Weil, Gotshal & Manges LLP and Pedram is a relationship manager at BlackRock. Since our engagement was at a sunflower maze in NJ and our wedding will be at the Ashford Estate, we really wanted to have our engagement photos taken where our first home together was – NYC. We started off our classic New York City-inspired engagement session on the roof of our Chelsea apartment building. We then took an Uber to our favorite neighborhood – the West Village – and took pictures among the tree-lined streets and gorgeous brownstones. Lastly, we went downtown to the Freedom Tower to snap some final pictures there before the sun set. It was magical. Our photographer, Christy Nicole Photography, made us feel super at ease and really captured the playfulness of our relationship and our love for each other. 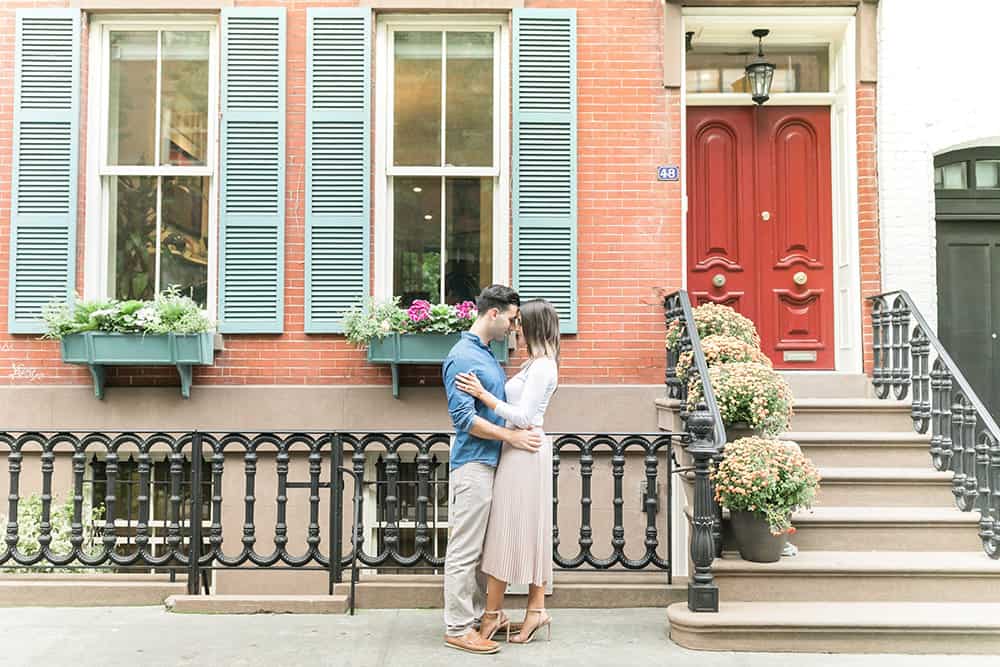