Posted on December 19 by Allison Dupree How did you two meet? We met our first year of college at Cabrini College in Radnor, PA. We had a mutual acquaintance that we met the first week of school, who asked us both to join her at one of our first college nights out. We were best friends for the next two and a half years until junior year when Matt went out of his way to show me he loved me. When did you get engaged? 12/16/2016 Where did you get engaged? Rockefeller Center in NYC under the Christmas tree The day we got engaged we both had taken off work to celebrate our 9yr anniversary, which fell on 12/11, and my birthday, 12/23, in NYC for Christmas. We had visited NYC together before and LOVED Central Park. Apparently Matt’s original plan was a handsome cab ride set up where you walk into the park and (I unknowingly) board a horse & carriage to take us all throughout Central Park where he could propose. Anyway, the weather wasn’t looking good for Saturday, so Matt had decided to propose that very night when we got settled in NYC at our hotel and had planned to visit Rockefeller Center and the Christmas tree.
He was being very short with me and the walk to the tree I kept wanting to stop into different places and he was shutting me down. I didn’t except a proposal because I normally pack and unpack for him and did not come across anything like a shiny ring. 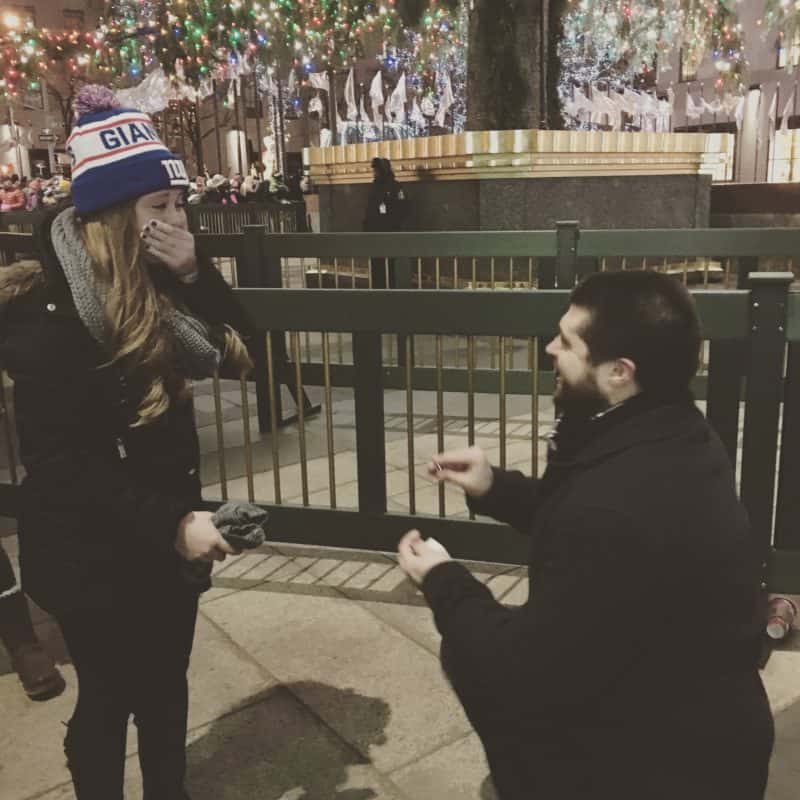 Long story short, I convinced Matt to stop into a deli for my favorite Snapple Apple (which I am known for) and a GIANT cookie which I insisted upon. He tried to talk me out of it saying “you will take one bite and then make me carry it” which I didn’t see the big deal since he had been doing that for 9 years already. I got my giant cookie and half a block later ask him to put it in his pocket. He lost his cool to say the least and I couldn’t understand I kept saying “it’s a beautiful weekend we have planned for months why are you getting so angry over a cookie?” He then told me he wanted me to make sure I didn’t have my pockets stuffed with things and said he thought of a good way to get a romantic pic in front of the tree. He said “we will ask a couple that looks safe who is also taking selfies of themselves and the tree and ask them to take our pic and we will take theirs” I thought wow problem solved, great! Apparently when he grabbed my phone to hand to the nice young woman, he whispered to her “don’t stop taking pictures I am about to propose” So I am standing there smiling away ready for photos and he goes “hold on hold I need to say something..” that’s when he got down on one knee and I automatically couldn’t focus on anything but the fact he was on one knee. He started to say my name and a security guard interrupts to ask us not to have any beverages near the tree (my Snapple apple) – Matt looked at the guy and goes “hey buddy I’m trying to propose to my girlfriend right now!” The man was very sympathetic. So he proposed and I said yes and everyone around us cheered! It was just like in a movie and the best part was when we sent the photos to my friend and bridesmaid Sophia, she called us crying saying “you turned live photo on!” If you know what live photo is on the iPhone, it records before and after the shot, so we have an entire piece by piece video of from when he started, the interruption and me saying YES!!! We love the footage from our proposal, its perfect!
We followed the engagement up with calls to friends and families..lots of tears & kisses and then a walk to Time Square. I was over the moon to say the least!
Hide Photo List Show Photo List