Melissa and Jorge at The Grove 
We met on in 2011 at a work event. We became friends through work, and as our friendship grew into something more we were reluctant to define our relationship. But on July 15, 2013 our fate changed when coming back from a day in Hoboken. Jorge’s Jeep was cut off by a speeding car. Losing control, his Jeep flipped three times, and he was ejected to land helplessly on the Garden State Parkway. I was following behind in her car and watched as Jorge’s body flew through the air and landed hard on the ground in the midnight darkness of the open highway. I thought he was dead. After calling 911, I pulled over and ran to his side as he bled. Eyes closed, I told him that I loved him for the first time and prayed that God would not take him away. Jorge was rushed to the hospital for emergency surgery after splitting open his skull, breaking multiple ribs and fracturing vertebrae in his back. I waited alone in the hospital, and four hours later a doctor walked in and said, “Is there a Melissa here, Jorge is asking for her.” I ran to his room, and it was then that it all made sense. We were meant to be. It was Memorial Day weekend, and we were eagerly awaiting the unofficial start to summer. This weekend was especially important because my younger brother had just graduated from college, and my family was hosting a celebration during the weekend. My mother convinced me, after numerous phone calls and text messages, that it was best if I left early for the Shore instead of waiting for Jorge. I was going to help my mom clean and cook for the party and Jorge would meet us at my family’s Shore house sometime on Saturday. Saturday morning at 7:30 AM, Jorge gently woke me up. He whispered to me, “I bought a toy for the summer—come and see.” Jorge walked me out to the deck to see what he bought. What I did not know is that Jorge had been up since 4 a.m., and he arrived at the Shore house at 5:30 a.m. ready with balloons, helium tanks and fireworks. My brother, cousins, grandparents and parents helped him set up “Marry Me” written in balloons on the dock of the house. For our wedding, we wanted to put a modern spin on a Gatsby-era romance. To truly embody the feelings, our colors were gold, ivory and red. The bridesmaids wore identical gold sequined gowns with classic curled updos like old Hollywood glamour. The bridal bouquet was a combination of white roses and orchids with pops of pearl accents. The bridesmaids and groomsmen did not have traditional floral bouquets or boutonnieres. Instead, the gentlemen wore vintage 1920s-inspired white feathers dipped in gold and the ladies carried ivory and gold flapper-style ostrich feather fans. Feathers played a large part in the wedding décor. We had two different types of centerpieces: a 48-inch glass vase with floating orchids and a halo of white hydrangea and ostrich plums towering at the crown; and a 27-inch gold five-arm candelabra that sat upon a bed of red roses, burgundy hydrangea and red wildflowers with long ivory tapers. The sweetheart table featured a set of ivory thrones with gold accents and displayed a set of three glass candle holders on all containing floating orchids. We also put photos of us in vintage baroque-style gold frames in the foyer and all common areas of the venue. Jorge and I arrived to The Grove after the ceremony in a classic princess Rolls-Royce to kick-off the yesteryear sentiment. Jorge’s mother passed away when he was 22, so we had a beautiful memorial table for those who were in heaven, and Jorge also wore his mother’s photo on his cufflinks. To honor the cultural heritage of us, we had Latin, Italian and Croatian music along with modern hits. We had a string quartet perform at the church and also join us for the cocktail hour. As guests arrived, a single violinist greeted them in the foyer, then the entire group transitioned to the Juliet Balcony that overlooked the cocktail hour. After dinner, guests could enjoy a hand-rolled cigar and sip on spirits from a whiskey bar.
Upon walking into the Grove, we knew it immediately embodied the Gatsby-era feel we wanted. From the countless chandeliers to the grand velour couches and gold-accented staircase, we knew the Grove was for us. We also loved all of the suites available to use on the second floor for our bridal party’s leisure. We were incredibly impressed at how clean the Grove was and how professional and organized the staff were; our decision was easy. If you want elegance, you want The Grove. Our wedding featured a decadent cocktail hour with 11 stations including a full pig roast and four-bottle tequila luge. Playing up Jorge’s culture, we had classic and traditional Peruvian dishes like ceviche, Papa a la Huancaína, Lomo Saltado and Torta Helada and Alfajores. For the dinner, we started with poached pear salad with toasted walnuts and truffle dressing. Guests had a selection of three entrées: filet mignon, Mediterranean branzino or chicken breast stuffed with spinach. Our cake was ivory with gold accents and red florals towering five-tiers high and had alternating flavors of French cream with raspberry tarte and limoncello. My gown was a traditional sweetheart ballgown that was fitted at the waist with a cathedral train with gentle Swarovski crystals sewn in throughout the body of the dress. The underlayer of the gown was all white sequins, which caused the dress to glimmer and sparkle in the light with each movement. It was tailored by the same woman who designed my mother’s wedding gown. I only tried on four dresses before made my choice. When I saw it in the mirror, I immediately envisioned myself walking down the aisle to my husband. The first open dance the deejay played was my favorite moment. It was a modern version of a classic song, “Večeras Je Naša Fešta,” by Tomislav Ivčić . This was also the first song played at my parents’ wedding—it is an important song to our whole family. The dance floor filled with guests and even though most did not understand the lyrics, they felt the joy in the music. Our entertainment was everything we wanted from the famous POSH light show to the indoor sparkler effects. We never left the dance floor. One detail you couldn’t live without?
My bouquet include charms honoring my aunt and grandmother—knowing they were so close to me that day was everything. I could not imagine not having those charms. Or our letters. Being able to rewatch our wedding videos and hear each other read the notes we delivered the morning of the wedding is priceless.

Did anything go wrong?
Oh, yes! Other than the fact that it rained, we nearly forgot the rings. In fact, we made it it to the church and realized we left the rings in my mother’s bedroom. My maid of honor and a bridesmaid ran back to the limo and raced to the house to get them. My maid of honor walked the rings down the aisle on her pinky finger. If you have good food, great music and people you love around you, the day will be perfect no matter what. Of all your vendors, make sure you find a photographer and videographer you love—that service is a gift to yourself. Everything else fades, but your photos are forever. 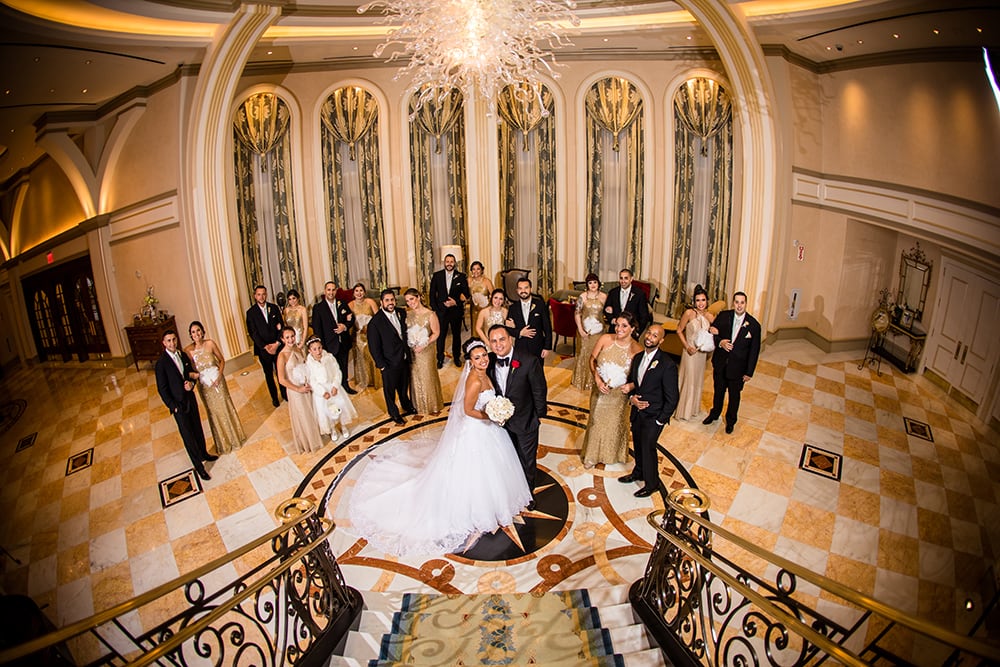 We did a minimoon in New York City. Fairest Of Them All Boutique