Meghna and Carlo at Paramount Country Club in New York


Carlo and I met in our high school French club. I was President and Carlo was Treasurer! We stayed in touch during college and both found jobs in DC after graduation, where our relationship grew and flourished. In 2019, we moved back to New Jersey to be closer to our family and friends. We had rented a cabin in the Catskill Mountains with a group of friends (pre-Covid). To our surprise, we were greeted with an unexpected late-April snowstorm. Nevertheless, Carlo was insistent that we hike, despite my suggestion to spend the day indoors playing card games. We started hiking up the snowy and slippery trail  and stopped for pictures at a beautiful waterfall. Carlo got down on one knee, and I cried tears of joy. We popped some champagne and returned to the cabin to celebrate with friends! Originally, we were planning a large wedding of 250 guests, including invitees from across the country and the world. After Covid hit, we made the difficult decision to postpone our large wedding and host a small ceremony at Paramount Country Club in New City, New York, with just our local friends and family. Due to all the uncertainty of 2020, the final decision was not made until six weeks before the big day, giving us a short amount of time to put together a wedding. We set up a livestream over Zoom so our friends and family across the world could attend virtually. Our colors were blush, white and gold. The mandap was adorned with white hydrangeas and pink roses—we chose a simple mandap design as to not take away from the breathtaking views. My yellow lehenga and Carlo’s navy suit offered a pop of color against the delicate roses. The Hindu ceremony was performed in Sanskrit and translated to English by a pandita (a female priest). We worked with the pandita to curate a modern version of the Hindu ceremony. For example, the kanyadaan (an old tradition where the father gives away the bride to her new husband) was replaced by the swayamvar (bride and groom choose each other as their life partners). My grandparents composed short poems called Manglashtakas and sent in audio clips of them reciting the verses. After each Manglashtaka, the guests attending in person tossed flower petals toward the mandap; meanwhile the guests attending over Zoom participated by sending the flower emoji! Carlo and I both love the mountains – hiking, mountain biking, skiing, you name it, we’re there. We fell in the love with the mountain views at the Paramount Country Club. Moreover, the Paramount had flexibility to offer a variety of Indian, Austrian, and Italian dishes at the cocktail hour and dinner. This was key because it symbolized our cultures coming together as one. Unfortunately, our reception was postponed to September 2021. Due to Covid, we were not able to serve food at our micro-cocktail hour. Instead, we presented our guests gift boxes with a mix of our favorite Indian treats (chakli, puran poli and ladoo). Carlo’s family also served homemade Italian cookies. Many of our guests were surprised by the color of my dress, since typically red dresses are associated with Indian weddings. In fact, traditional brides in Mahatrashtra (the region in India where my family is from) wear blue, yellow or green sarees. I chose a lehenga choli, a three-piece dress consisting of a long skirt, a fitted blouse and a dupatta, similar to a shawl. I worked with Sajda by Suman to custom design my dress, which was tailored in India. The detailed sequins and embroidery were stitched by hand. Not one for heavy jewelry, I opted for a simpler necklace, tikka and traditional gold bracelets. 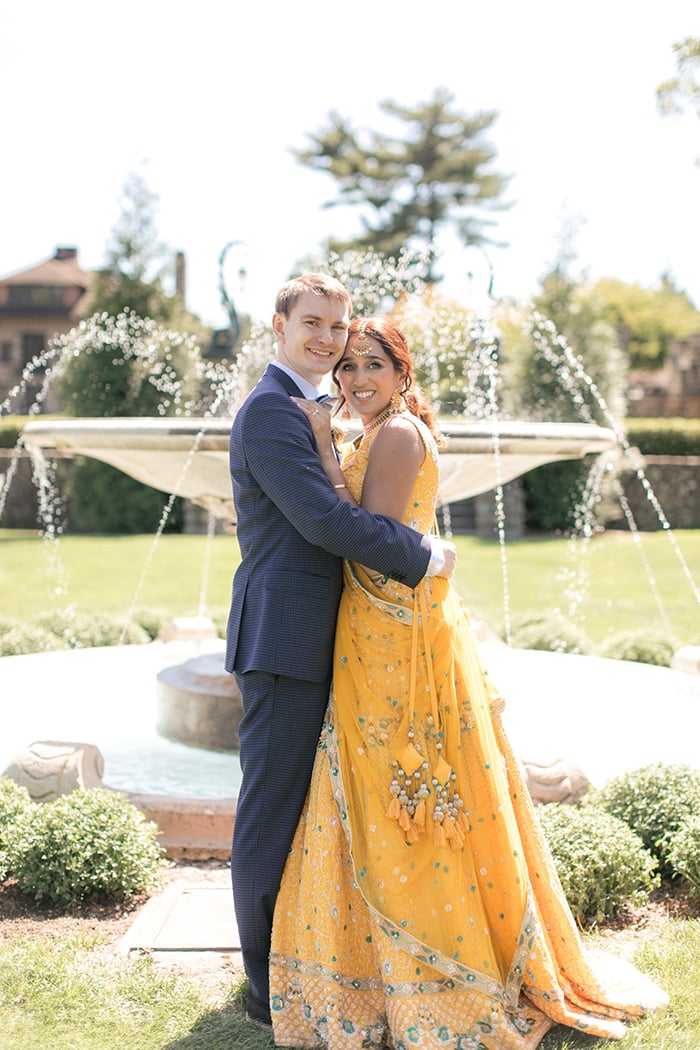 Our first look. Although Carlo had seen a swatch of the fabric from the dress, he didn’t know exactly what my dress looked like. I had butterflies as I approached Carlo, who was standing with his back to me, waiting for me to tap his shoulder. Once I saw his beaming face, I immediately felt relaxed, eager to get married and excited to start our lives together. Our tripod! My cousin set up her iPhone and live-streamed the entire wedding ceremony on Zoom for our friends and family in Chicago, Europe and India. Even though so many of our loved ones couldn’t attend in person, we were delighted that they could celebrate with us from many miles away. The Zoom call stopped working right after I entered the mandap. Luckily, our cousins worked together to quickly get the video call back on, so the guests attending virtually only missed a few minutes of the ceremony. I had no idea until weeks later—they did a great job of fixing the issue without us noticing! Accept help from others, and delegate tasks! Many of your friends and family are happy to help, they just need some guidance on what exactly needs to be done. We rented a cabin in Bar Harbor, Maine.