For our favors, we chose to give our guests something that they could enjoy forever, so we put wildflower seeds in a packet and labeled them with “Let Love Grow”, along with a special message from us. As an added bonus, we also gave out personalized chocolate covered oreos, courtesy of Chocolate Carousel. During the reception, we served a pear and provolone salad, and a choice of risotto or autumn squash soup. In between the second and third entrees, we were served sorbetto to cleanse our palettes. For the entree, our guests had the option to choose from five meals – steak, stuffed chicken breast, pecan crusted salmon, stuffed pork chop, or eggplant parmigiana. Finally, dessert: milk and while chocolate fountains with an assortment of things to cover, such as graham crackers, marshmallows, and pretzels; a fried food station, with fried oreos, donuts, and zeppoles; an ice cream sundae and milkshake station, which was a total hit. As bride and groom, we were made special milkshakes, which consisted of two huge mugs covered in sprinkles. On top of all of that, we had two wedding cakes – our traditional wedding cake with lace detail, which was vanilla cake with a raspberry creme filling, and a grooms cake that I surprised my husband with, which was Batman and Catwoman overlooking Gotham City. It was a chocolate cake with peanut butter mousse. 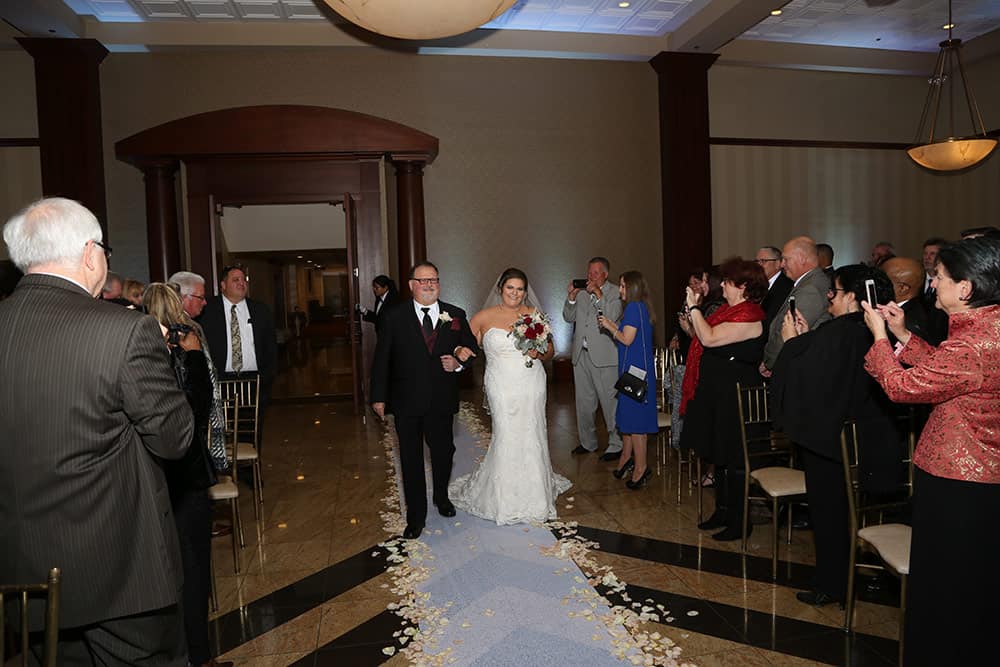 Another favorite moment was my dad walking me down the aisle. It was such a special moment for me because for a very long time, my father battled an illness that didn’t promise him that he’d someday give his little girl away. Where did you go on your honeymoon?