Mary and Matthew at Park Chateau How They Met
When Mary Chiarello and Matthew Holly laid eyes on each other at a popular drinking establishment in Manasquan on July 4 weekend in 2016, he was immediately smitten. “When she walked in, it was as if a light was shining on her,” says Matt, who grew up in Middletown. The Proposal
A year and a half later, they returned to the Shore for a surprise proposal, perfectly orchestrated by Matt. “My future husband took me to the Boardwalk that sunny day. Little did I know that he had hired a photographer who was inconspicuously sitting on a bench near us. I never suspected a thing,” says Mary who hails from Robbinsville. Two Marriage Ceremonies
Although they envisioned a large reception, the Shore-loving couple preferred to be married in an intimate April 25, 2019 ceremony at St. Catherine Church in Spring Lake, surrounded by their immediate family members. Two days later, 260 guests joined Mary and Matt at the Park Chateau in East Brunswick for a second ceremony followed by a blow-out bash. “It was an amazing event and the venue was absolutely breathtaking,” says the bride, who sparkled in a Castle Couture gown designed by Matthew Christopher. A Close Call
But even the most perfectly orchestrated wedding can offer an occasional surprise. “I will never forget walking up the aisle and suddenly realizing that we didn’t have the rings,” Mary says. “Luckily, one of my dependable coordinators had them safely in her pocket and she handed them to the best man without anyone noticing.” Details of the Day
Wedding planner Jenny Orsini of Jenny Orsini Events helped the couple pull off their whimsical reception in a romantic palette of blush, ivory and champagne. Bridesmaids turned heads in their identical blush-pink Amsale gowns. A five-tiered wedding cake echoed the pretty pastel theme. And pale, lush roses, hydrangea and orchids adorned dining tables, the sweetheart table and its massive fireplace backdrop, and even a dramatic, two-story fireplace banister. All About the Menu
Guests enjoyed a cocktail hour with sushi, chicken and waffles, and Italian specialties (including a fresh mozzarella station), followed by a sit-down fête that featured sea bass and filet of beef. A doughnut wall was the icing on the cake. Despite the over-the-top menu, “I don’t even think I ate at the wedding!” Mary admits. 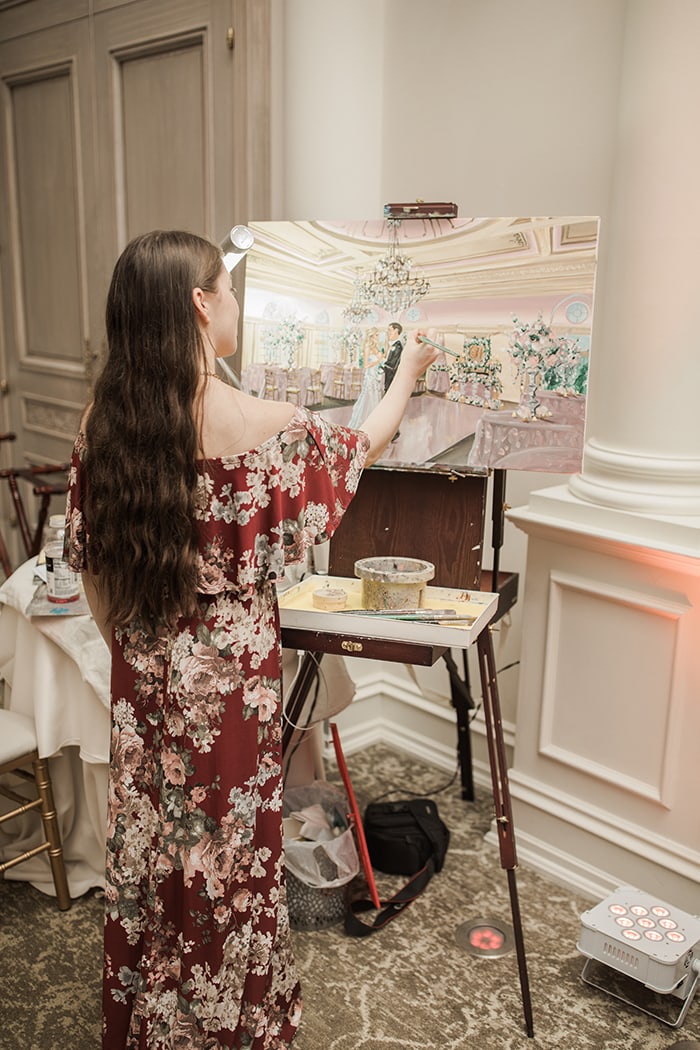 Surprise Performance
The Rhythm Shop played the couple’s favorite pop rock tunes as guests packed the dance floor. “The band 100 percent made the wedding,” the groom says. But one of the best elements of the reception was yet to come. At the after-party, guests were wowed by the original Jersey Boys, who performed for 45 minutes while everyone feasted on funnel cakes. Truly, it was a night to remember. Advice for Brides
Looking back, Mary offers a word of advice for other brides. “It’s so easy to get wrapped up in the planning and become influenced by the advice of others but, at the end of the day, it’s really about what you and your husband wish.” The Honeymoon
Following a two-week honeymoon in Hawaii, the couple settled in Freehold. Mary and Matt welcomed a baby boy in March 2020.

A Touch of Elegance