Kimberly and Justin at The Estate At Florentine Gardens It was the Summer of 2014, the two of us were separately headed down to Dover, DE in our respective Cruise America RVs to attend the Firefly Music Festival with our college friends. Our RVs were parked just a few spots down from one another and through mutual friends we were first introduced. By the end of the trip we found ourselves with long rides home, no voices and a budding relationship. Only the two of us could find love in the RV camping lot at our favorite music festival. Over the next year, in Hoboken, NJ, we continued to fall in love, engage in new adventures, start some unusual traditions and create wonderful memories. It was the evening of March 1st, the night before my 30th birthday and I had been out shopping for our trip to Mexico which was just a few days away. Justin was home in our Manhattan apartment nervously preparing my favorite meal. After we ate, he spent the remainder of the evening trying kill time by helping me prepare gift bags for my birthday winery tour on Long Island which was planned for the next day, and watching the Bachelor. On every birthday, we do an New Years Eve-esq countdown to midnight, followed by a small present. Justin told me to stand up and not to move, he headed into the bedroom to grab the “small” gift. From the other room, via Amazon Alexa, Justin requested “Thinking Out Loud” be played in the living room. With two dozen red roses Justin emerged in his sweatpants and a suit jacket. Finally, he began his proposal (that neither one of us can seem to remember the exact words) and he got down on one knee. I was completely surprised and it was a wonderful and thrilling evening that we will both never forget. We wanted to have a chic wedding that was both timeless and trendy with lots of dancing and delicious food. The bridesmaids’ wore wine crepe BariJay dresses and the groomsmen wore black tuxedos with wine bowties and pocket squares. We had ivory linens and the tables alternated between elevated full style florals, all-white and cream coloring with accents of vintage blush, white hydrangea, quicksand roses, snowflake spray roses, and white orchids, and flower towers with umbrella of cascading white orchids with yellow heart.  The room was dimmed with a blush lighting and we had votive candles decorating the windowsills and fireplace. Our favors were places on each table and were personalized to our guests. They included a mixing spoon engraved with a “S” and our date, something that guests could use for years to come, and the liquor to create the drink “The White Lady”. I think everyone really appreciated the personalization of the favors. We included personal photos of us through the years and wedding photos of our parents and grandparents. We had a neon sign that said “The Schneiders” which hung at the bar. Our guestbook was a large handmade “S” that our guest could write a note on and we could hang the art in our home. The ballroom and all of the décor felt elegant while maintaining warmth. After walking in we knew it was the one! It had a gorgeous ballroom, a beautiful garden area, and perfect cocktail hour space and awesome bride and groom suites. The food we sampled was amazing and there was going to be lots of it. At Florentine Gardens they treat you as family. They were so helpful and always available and it was a personal experience. I think because it is family owned it had a sense of care that some other venues didn’t have. 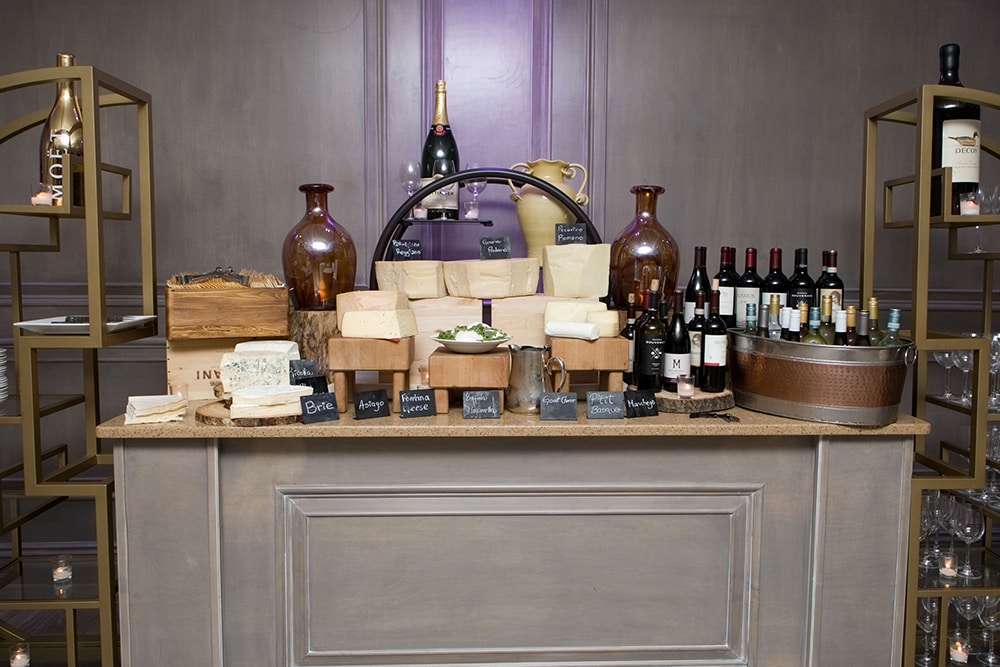 We had the most epic cocktail hour! As we met at Firefly Music Festival we had a “Firefly BBQ” station which included sliders, hotdogs and cookout food. We wanted to incorporate family tradition and named the Italian Station, “Nanny’s Sunday Dinner” after my grandmother. We also included “MiMa’s Grilled Cheese” named after Justin’s Grandmother who used to cook grilled cheese for all of his friends when they would visit. We had a pasta station called “It’s Not About The Pasta Station” paying homage to Vanderpump Rules, a show we watch. Each of these stations included a picture that tied to the memory. In addition to that, we had a cold antipasto table, a cheese bar with wine parings, Italian charcuterie, a steakhouse station, a carving station, a chilled seafood station and what seemed to be like a never-ending supply of passed hors d’oeuvres. We had signature drinks which included the Bride’s Pleasure- the NYC mule and the Groom’s Poison-the botanist gin & tonic. In addition to some standard beers, we served Schneider-Weiss and 4/20 Beer and even had a Martini Bar where the drinks were chilled by being poured down an ice sculpture in the shape of an “S”. Everyone was blown away by the cocktail hour, there was so much food and so many options for people. Our entrees were chateaubriand, free-range French cut chicken breast stuffed with prosciutto, mozzarella and ricotta with a port wine reduction and a miso glazed Chilean sea bass with a teriyaki beurre blanc. For dessert, we served our four-tier wedding cake which was vanilla cake and chocolate pudding made by Palermo’s Bakery and also had a full Viennese hour with many delicious stations. We also added a cigar bar for our guests to enjoy and even set up a “4/20 Munchie Station” on the way out of the wedding which included treats like coffee, pretzels and donuts to go. I wanted something I loved that was unique and one of a kind so I created a custom Casablanca Gown. After trying on many dresses, I finally knew what I wanted and worked with a designer at Bijou Bridal and Casablanca to create my absolute dream dress. It was a clean ivory fit and flare in matte Georgette with stunning silver embellishments. It had an ornately beaded back with round rhinestones, Swarovski Crystals and pearls and I added a belt and cap sleeves. I wore a pair of gorgeous Jimmy Choo pumps the whole night long. We would say our family and friends. We loved all of our details -everything from our vows, to the food, to the personal touches and just the overall excitement of the day- but it was so much more special because we had our family and friends there to share it with us and to help us celebrate such a wonderful and meaningful day that we will never forget! I had a beautiful cathedral veil that did end up ripping a bit before I even put it on. My mom, aunt, maid of honor and cousin hid in the bathroom trying to sewing it back together somehow. I think they were able to mend it as best as they could but I was just so excited to walk down the aisle that this didn’t put any damper on the day. This is so cliché but my advice would be enjoy every second of the day because it goes by so quickly. All of the hard work will pay off so take the time enjoying everything you put together. It’s truly a day to celebrate the unity of your marriage with all of your family and friends! We went to Fiji, Australia, New Zealand. The three weeks of travel was a trip of a lifetime and it was so exciting to do it as newlyweds!

The Estate At Florentine Gardens