How did you meet?
The way they met really seemed like the stars aligned, ever so perfectly.  Justin was out with a bunch of his boys bar hopping in Manhattan.  Katie had spent the day in Long Island for her younger twin cousin’s first communion. Since Katie was already all dressed up, on the trip home from Long Island back to Hoboken (where she lived) she called a few friends to see if they’d like to go out in Hoboken when she got back.  She decided to meet up with a newer girlfriend from her gym, Lindsey. They had started at one bar and after a few drinks her girlfriend suggested go to a bar called Republic.  Katie hated that bar because she had been yelled at for dancing in the wrong place but didn’t want to seem difficult with her new friend so decided to give that bar one last try.

In the meantime, Justin had started his trip home from Manhattan with his friend Eric and decided on a whim to stop in Hoboken to hang out for just a little bit longer. Katie and her friend Lindsey had just done a lap around the bar and Lindsey said, “where should we stand?”  Katie saw Justin out of the corner of her eye and said, “those two guys are cute over there. Want to go stand next to them?” Before she knew it, Lindsey had walked right up to Justin’s friend Eric and started talking.  Katie was in shock as her plan had been stand next to the cute guys, smile, and hope they come talk to us.  Not at all prepared with any game plan she figured she had nothing to lose. She walked up to Justin and said, “Hi, I’m Katie.”  The chemistry between the two of them was instantaneous and they spent the rest of the night learning everything they could about each other.  Justin walked Katie home that night and on the following Friday night took her out on their first official date at Eatly in the city.

How did you get engaged?
Four and a half years later, on Thanksgiving morning, Justin proposed to Katie in front of that same bar they met at all those years ago.  When they woke up he said to Katie, “why don’t we go take a walk and get some breakfast.” Not thinking it was Thanksgiving and literally every place would be closed, the two left the house in sweatpants. They walked to where she thought they were going for breakfast and after realizing it was closed Justin goes “yeah but the acai bowl place down the street from here is open.”  Katie didn’t think twice, and they walked hand in hand down Washington street.  Before she knew it, Justin was getting down on one knee and professing his love for her right in front of Republic.  Through tear-filled eyes Katie said, “yes of course I’ll marry you” and the two spent the rest of the day celebrating with her family.

Details of the day!
Justin wanted to do a very small and simple wedding.  Katie wanted a huge elaborate wedding party of her dreams.  Thankfully the groom adhered to “happy wife happy life” before they even tied the knot.  They decided to do a lot of things less traditional then the norm.  That started off with a video wedding invitation which included clips of famous wedding movies and photos of the couple (along with a couple boomerangs).  They got married on June 30th and it was an incredibly hot day.  Katie had always dreamed of getting married in front of a lake,t so the two choose Indian Trail Club in Franklin Lakes which had a beautiful outdoor area in front of Franklin Lake where the ceremony could take place.

They decided to exchange our vows privately in a first look earlier that day, so they could have a nice intimate moment together and try to spend more time with their wedding guests. Rather than the traditional bride tap the groom on the shoulder to turn around and see her for the first time, Justin was waiting for Katie under the beautiful white birch arc her father had built and her mother had decorated.  Katie walked down the aisle to meet Justin at the arc where they exchanged their vows that they wrote to each other.  It was such a beautiful moment.

They had a quick ceremony that Katie’s best friend, Kristine, officiated after being ordained online. Katie’s mother read a love poem, the couple wrote love letters to each other to read on their 5th anniversary and nailed them into a box with a nice bottle of red wine to open in a few years.  They had a metallic color scheme with lots of rose gold and gold. Favors were marble coasters with gold edges and custom metallic gold guests names. Groom wore royal blue to match his eyes. Bride’s flowers was a cascading bouquet of bright pinks and whites with lots of greens. Maid of honor flowers were simple peonies with olive leaves. They only had a maid of honor and best man, but they had what they called a wedding entourage -16 cousins and nieces of the bride and groom who walked down the aisle with handmade signs.

Rather then a proper sit-down dinner the bride and groom opted for a more casual stations reception.  Let’s be honest, the best food at weddings is always the cocktail hour so they opted for cocktail hour the entire time.  Katie being a stickler for details had the full menu on the wedding website and printed up on the back of the programs, which doubled as fans.  They allowed guests pick their own seats to encourage as much mingling as possible. Guests were allowed into the reception area as soon as the ceremony ended.  The couple loves to dance so there was non stop dancing as soon as everyone got into the main reception area.  Later in the evening some of the photo booth props even made it out onto the dance floor which included cardboard cut outs of the bride and groom’s cats as well as few of their closest friends’ pets (which they had done as part of their gift).

Why did you choose your venue?
It’s the most beautiful one in NJ. And they wanted to get married outside by a lake. Indian Trail Club is not just one of the most beautiful venues they had ever seen, but they are so flexible and easy to work with.  The event planners there will help you create your exact vision for your big day.  To be honest, the bride and groom liked this venue so much that they had booked their wedding date there about a year and half prior to even getting engaged. 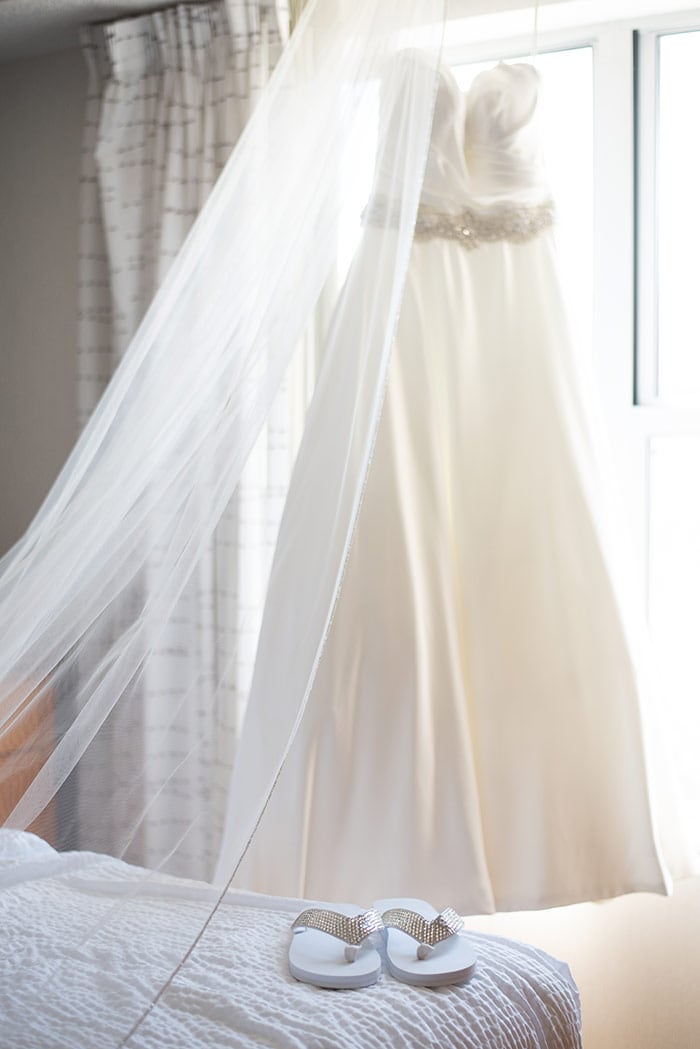 All about your gown!
Satin sweetheart neckline ball gown with rhinestone belt. Katie pictured her fiancé spinning her in that gown and after 12 appointments in NYC over a two-week period and trying on over 100 gowns, she knew that was the perfect choice.  Katie also had a custom veil made from the sweetest little old lady on the upper west side.  The veil was cathedral length and lined with beads.  It also included appliqués at the bottom and was quite the statement piece.  The bride loved the veil so much that her tailor actually made a bustle for it so she could bustle it up and wear it during the first hour of the wedding. What was your favorite moment?
Every single second. They wish they could relive that day over and over again as it was truly the best day of their lives.  If they had to pick just one moment, it would be seeing all the people they love and care about most coming together to celebrating their love.  There is no better feeling then brining their families and friends together. One detail you couldn’t live without?
Childhood photos of the bride and groom used as table numbers.  They were from all different ages and were absolutely hilarious.

Did anything go wrong?
The bride had her veil laying across her satin wedding gown and right before walking down the aisle the beading on the veil pulled her wedding dress.  The shuttles the couple had hired to bring guests from the hotel to the reception screwed up.  They were apparently waiting for the guests at the wedding reception.  It took a while for them to fix that issue but they finally picked up about fifty percent of the wedding guests at the hotel and brought them to the venue just in time to see the bride walk down the aisle (although slightly later then she would have liked).

Any advice for future brides?
Enjoy every single moment because it goes to quick. Also make sure no matter who is contributing budget wise that you remember to make choices that make you and your partner happy (you can’t please everyone)

Handmade by bride's mother and bride