Julia and Mike at The Union League of Philadelphia How they met.
During a major snowstorm in February 2010, two Loyola University Maryland sophomores from New Jersey met through their roommates at a dorm party. It was Mike DiNapoli’s warm and friendly smile that caught Julia DePaul’s attention.
“I can sill remember that I felt compelled to know him,” she says. “I just wanted to be his friend.” Julia, 28, of Medford, and Mike, 29, of Saddle River, spent time getting to know each other and she was thrilled when he asked her out a short time later. They began dating and never stopped. “There is so much to love about Mike,” Julia says. They soon realized they shared the same values, including spending time with family at the Jersey Shore. “We had a ton in common and he made me laugh, and all the things I had in my mind that I would want in my husband, I found in him.” 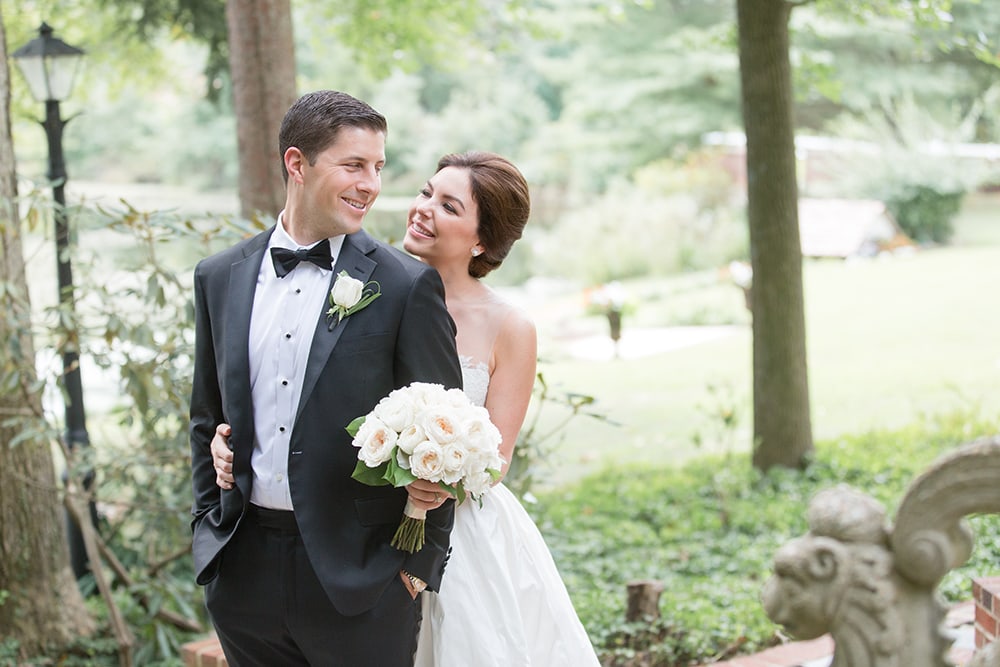 How they got engaged.
The star of Mike’s surprise proposal in June 2017 was a brand-new drone that recorded the big moment on video. On a Friday evening on Long Beach Island, Mike was flying the drone and told Julia that he didn’t know how to land it, so she decided to give a it a try.
“I grabbed the remote and he got down on one knee,” she recalls. “I loved it. The video is even better than any photo because you can completely see the surprise on my face.” Their venue:
The pair tied the knot on September 7, 2018, a day that began at the Valley House, her grandparents’ 30-acre estate in Pine Hill, and counted in Philadelphia at St. John the Evangelist Catholic Church at The Union League of Philadelphia, where a lavish reception was held. The church ceremony featured the Keystone State Boychoir, which sang as guests entered and exited the church and during the mass. One of their favorite details was incorporating the Valley House into their day, which Julia says was once the summer home of Al Capone. Not only does her grandparents’ home hold a special meaning because it has long been her family’s gathering spot, but it also provided what she called a fresh and unexpected backdrop for their photos and videos as they tried to make their wedding day stand out. The couple had their first look on the estate and posed all over the gorgeous property. “It’s a place he loves and appreciated for all the same reasons that I do,” Julia says. Details of the day.
At the reception, Julia achieved her vision of infusing the traditional venue with the European charm and serenity of the Valley House through an abundance of candles and romantic white flowers. “With the centerpieces and the floral installations, the traditional ballroom was transformed into a lush romantic garden,” she says. The elegant event was filled with unique, personal touches. During the cocktail hour, Julia surprised Mike with a performance by a Philadelphia Mummers spring band and guests enjoyed “Happy DiNapoli” trivia question on coasters printed with fun facts about the couple. Their favorite moment
The first dance was a grand choreographed number to Frank Sinatra’s “Come Fly with Me.” While Julia can dance (She was a Philadelphia Eagles cheerleader in college), Mike was “more of a two-left-feet kind of guy,” Julia says. “We took 10 lessons to learn how to dance together and we had a choreographed routine,” Julia says, “I was really proud of him and proud that we nailed it.” All about the gown
Julia wore a custom designed Amsale ballgown with a cathedral veil. Advice to other brides
Listen to your fiancé during the wedding planning process.
“There’s not many things that they speak up about and feel strongly about, so when they do, it’s valuable and you should take what they say and consider it.” Honeymoon Location
The couples took a honeymoon to the Maldives. The Union League of Philadelphia

The Union League of Philadelphia