Brittany and Chris at The Park Savoy Estate

Chris and I met on March 3, 2017 – a cold and snowy night in Stowe, Vermont. Neither of us are from Vermont, nor did we frequent that area, but that one night we were in the same place at the same time and it happened to change the entire course of our lives. Chris and his friends planned a snowboarding/skiing trip to Stowe and planned to rent a large house. In order to fill some open slots, they extended the invite to friends and friends of friends. I happened to be a friend of a friend of a friend.  After fighting through a six hour trip of snow, hail, and dust storms, we arrived at the house and I immediately felt an odd case of butterflies but I wasn’t quite sure why. The door to the house opened and out came Chris, who greeted us with the biggest smile I’ve ever seen. He carried all of our heavy bags into the house and as I made our way into each room to say hello to the other guests, I realized Chris was oddly in every one of them. We spent the rest of that night talking about our families, careers, goals – deep conversations that you typically don’t have until you’re far into a relationship. We were inseparable for the rest of the weekend and our friends (now referred to as the Vermont Crew) even let us sit by ourselves in the living room for one of the group dinners so we can have a private “first date.” At the end of the weekend the Vermont Crew spent the last few hours walking/driving around Stowe’s downtown and we continued to talk about seeing each other again and what our future holds; however, we forgot that we didn’t exchanged phone numbers. Shortly after, we ended up in separate cars, going separate places and remember thinking “OMG did we really just accidentally leave each other without saying goodbye and without leaving a way to get in touch?” My friend reassure me that we would eventually be able to exchange information through someone in the Vermont Crew, but that wasn’t good enough. Before I could even finish wrapping my head around what happened I hear the door of a store fly open and Chris comes running towards me marathon style and said “I need your number immediately because I can’t ever lose you again.” So I gave him my number, and he never lost me again. During the time that Chris and I were dating, I lived in a gated community that required guests to obtain a guest pass to park on the grounds. The passes changed in color based on the day, month, etc. Without my knowledge, Chris began collecting these passes beginning from the first day he picked me up for our first real date outside of Vermont. Also, without me knowing, Chris started to write all of our “first” memories together on the dated cards – typical firsts like “our first Christmas” and “our first time meeting the parents,” but also creative ones, like “our first strained muscle” (he’s a physical therapist) and “our first donut tour”. And on February 27, 2018, just several days before our one year anniversary trip to Stowe, Vermont, Chris proposed in the most surprising way. I thought I was meeting him at my house to start packing – he took the day off from work so he can “get things started.”  When I got home and started to turn the door knob into my house, I was immediately overcome with a very strange feeling and thought to myself, “what am I walking into right now?” Sure enough, when I opened the door, there was a large sign with instructions telling me to follow the cards upstairs and meet him downstairs. Hanging on strings across my ceiling and staircase were hundreds of colored guest passes with notes written all over them. With a rush of adrenaline and excitement I ran up the stairs, past all of the cards, to my bedroom where I found even more cards and decoration. I ran back downstairs, then down to the basement where I thought Chris told me to meet him. It turns out Chris was just hiding in the basement, and he intended to be waiting for me to come down to the main level after reading all of the cards. Apparently I don’t like to follow directions or read into everything (I’m a lawyer). So I surprised him, while he was waiting to surprise me! Even though I thought I messed up his well-thought-out proposal, it actually turned out even better then planned. He walked back up to the main level with me, and stood at the foot of the stairs watching my reactions as I read every card. Once I got to the bottom of the stairs, he proposed. It truly was the best moment.
Before we began planning our wedding, we always knew that we wanted an all black and white theme with hints of gold.  As time went on during our process we were a bit more conflicted in our theme: we wanted pieces that were ornate and estate looking, but we also personally liked the old farmhouse look. Two very opposite perspectives and ideas. After much research and trial and error, we decided to use old white doors as our entrance piece into the venue and that also contained the guests favors. The favors are vintage keys that also serve as a bottle opener. We used small rope to hang all of the keys from the window panes of the doors.  We decorated the space by having a love table, containing the wedding pictures of our parents and grandparents, a memory table with pictures of family members that have passed on, and other pictures of Chris and I. Our welcome sign was surrounded by a vintage gold picture frame and fresh flowers from Arcadia Floral Co. Throughout the venue there were floating candles, greenery and rose petals. The groomsmen wore black and white tuxedos and the bridal party wore black bridesmaid dresses. The gold accents were in the buttons of the boys’ tuxedos and the girls’ jewelry. Our centerpieces had white flowers with extra greenery to match the sporadic greenery around the venue. Chris and I visited more venues than we could count. We appreciated many of them but there was always something missing. We had high expectations coming to the Park Savoy Estate but didn’t quite know what we were in for until we walked through the doors. We weren’t inside for more than three minutes before we decided to have our wedding there. The breathtaking gardens and stunning ballroom were really the assets that won us over, we loved the estate/chateau feel and carried that theme throughout our wedding day. During cocktail hour we probably had 15 stations and then some. Every corner our guests would walk, they would be greeted with a new pass around, chafing dish, or a chef whipping up a specialty. While our guests enjoyed the cocktail hour, Chris and I were in the bridal suite with a gorgeous set up of tastings from every station and pass around in the cocktail hour. For dinner we offered Châteaubriand, chicken saltimbocca (best chicken I’ve ever had – not kidding!), and sea bass. We also had a fully-stocked Viennese hour with a chocolate fountain, specialty coffees, flambé, gelato, and made to order fried zeppoles/Oreos. This, of course, was complimented by our gorgeous cake from Palermos – all white, four-tier with a different design on each layer and last but certainly not least, a cannoli filling! My dress is a Pinterest dress! One of the first dresses I came across while searching Pinterest for ideas, was my wedding dress. But of course, because it was on Pinterest, it was extremely hard finding the designer’s name. I searched to practically the end of the earth but eventually found the name: Milla Nova: Polin. I was terrified to find out that it was predominately a European brand and only had one or two stores in the US that carried these dresses. I considered just ordering it blindly through the website or actually traveling to Chicago for fittings. But miraculously Milla Nova opened a little boutique in NYC. So I went and absolutely fell in love with the dress! However, a set back was that the center of the dress showed bare skin and that wouldn’t fly with my family or me. So I knew I needed to do some substantial work to fill it in. I had to rely on my imagination to see how the dress would look filled in. But no matter what I was determined to buy this dress and I did. The dress is a cross between a mermaid and trumpet, it has an illusion top that matched my skin tone so perfectly you could not tell it was illusion, and a gorgeous back design that speaks for itself. The alterations and customization were done by the famous La Robe by Leah. 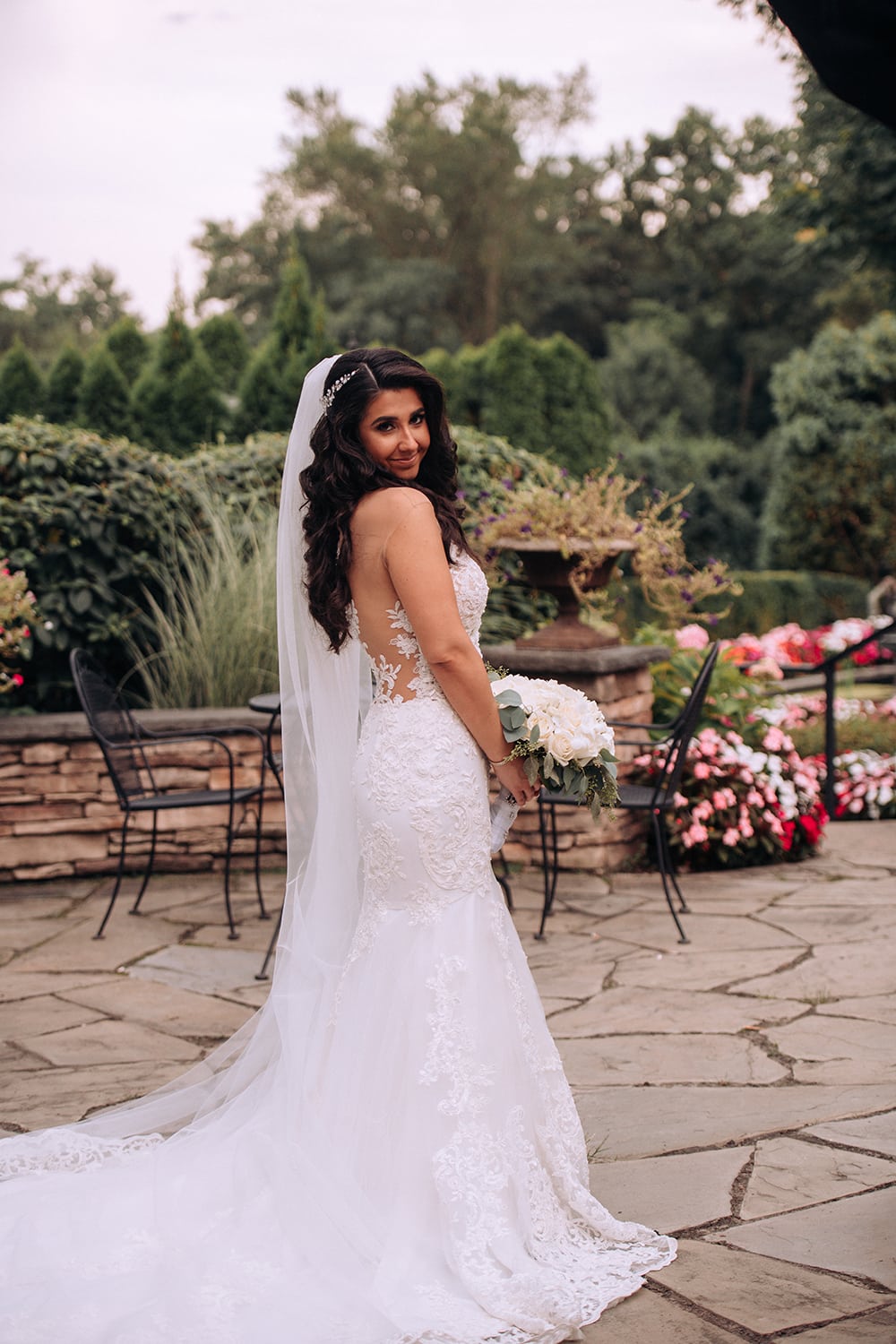 My favorite moment was right when the doors opened at the church and I began to walk down the aisle. I was so nervous on the drive to the church and so emotional waiting to walk in, but when the doors opened and I saw Chris, I immediately felt calm- like I was where I was meant to be. Also a pretty entertaining moment was when my father and I broke out into a dance to “Uptown Funk” by Bruno Mars in the middle of our father/daughter dance. He wasn’t too thrilled about the idea at first, but I’d say he enjoyed himself during it. My Christopher! All of the chaos, stress, pressure, and hard work is to enjoy this special day with the one who means the most. As far as details of the wedding itself, I would say our live painting. Janet Howard-Fatta painted our first dance in real time and our guests were able to watch as she captured and depicted all of the stages of such a precious moment. The painting is absolutely stunning and looks just like us all! Even if anything went wrong, it didn’t matter. It was the most beautiful day to ever exist. “Say You Won’t Let Go” by James Arthur. We fell in love with this song from the first lyric — “I met you in the dark, you lit me up.” Because we met on a dark night in Stowe and truly lit each other up, the lyrics felt so real.
Don’t cheap out on your hairstylist; your hair is everything. If there is a time to be selfish, it is now. Also take a moment to be alone with your spouse, look around and take it all in – it is a very busy day and will fly by before you know it. Chris and I started our honeymoon in San Francisco. We then stopped in Napa Valley for a day of wine tours of Stag’s Leap, Caymus, Mumm Napa, Cakebread, and Auberg de soleil. We then spent a week in Kuaui (take a boat tour of the NaPali Coast) and a week in Oahu (visit the North Shore).