Aleksandra and Joe at The Stone House at Stirling Ridge

Joe and I met on Tinder! I was anti online dating, but my sister encouraged me to set up a profile on a couple of sites. I told her I would give it one month and just shy of the one-month mark, I received a message from Joe that caught my attention. “Ask me a history-related question and I promise I won’t look it up!” I was intrigued because it meant he took the time to read my profile. I am a high school history teacher so it obviously resonated with me. He did end up getting the question I asked right (he swears to this day he did not look it up.) We met up for drinks a few weeks later at a speakeasy in New Brunswick. I knew it was coming in the Spring of 2019, but the question was where and when. It was Mother’s Day weekend and we were headed down to Asbury Park to meet up with my sister and mom for a craft fair. On the car ride down, Joe told me he had a surprise for me—we would be going to Angelica’s in Sea Bright. This restaurant means a lot to us, since it’s where we celebrated our first year anniversary. On top of that, Sea Bright was a special place for us: It’s where Joe lived before we moved-in together and where our love flourished. After the craft fair, we headed to Sea Bright but when it started to drizzle Joe was very annoyed and I couldn’t figure out why because we were eating inside. He suggested that we walk down memory lane and head to the beach near his old apartment. The only other person on the beach was a young woman who was talking pictures of the beach. Next thing I knew, Joe was turning me toward him and telling me how much he loved me and a bunch of other things that I don’t quite remember because I was in a state of shock! He got down on one knee and pulled out the ring. The woman taking pictures of the beach was the proposal photographer he hired to talk pictures of us! After a mini photoshoot, we went to Rum Runner where 15 of our closest family members were waiting for us to celebrate. Planning my wedding was something I have dreamed of for as long as I can remember. I am a very detailed-oriented person, so for me, everything was in the details. From the custom wooden drink stirrers, cocktail napkins to the masks and hand sanitizers. Our colors were midnight blue complemented by a slate/dusty blue and accented with hints of lavender. This was apparent through our invitations, the bridal bouquets, the bridesmaids and groomsmen attire and other details. The one place where the color palette slightly changed was in the flowers that were featured throughout the venue and on the tables. This is because we had to postpone from May to September and the seasons changed. I thought it was important to incorporate more fall colors in the florals at the venue. Additionally, I had a special booklet made that was placed on each place setting that provided a glimpse into us as a couple, explanations of Serbian wedding traditions and Italian wedding traditions, as well as details of the day. I am also obsessed with anything constellation- and astrology-related, so there were details throughout our décor. Our custom illustrated drink menu featured our rescue pup, Jack, and my family dog, Precious. I am Serbian (my parents were born in Bosnia), so it was important that there were cultural elements included. We had a “Rakija Bar,”which is a bar that features four Serbian speciality brandies—all imported for our day. Guests were able to sample and try the different types and learn more about them. To further honor my Serbian heritage, we also had a Serbian band in addition to the deejay. We were able to dance our traditional Serbian dance, kolo, which involves holding hands and dancing in a circle. We also paid homage to our roots by having a Serbian and Italian flag hung on one wall of our venue. Other cultural details included having Joe’s best friend, Rob, be the Kum, which in Serbian translates to the Godfather. He took this role very seriously and was even pinned by my parents with a sash that marked him as the Kum. He did not take the sash off the whole night. He also carried a wooden canteen, in Serbian called the Buklija, which was filled with Serbian brandy. 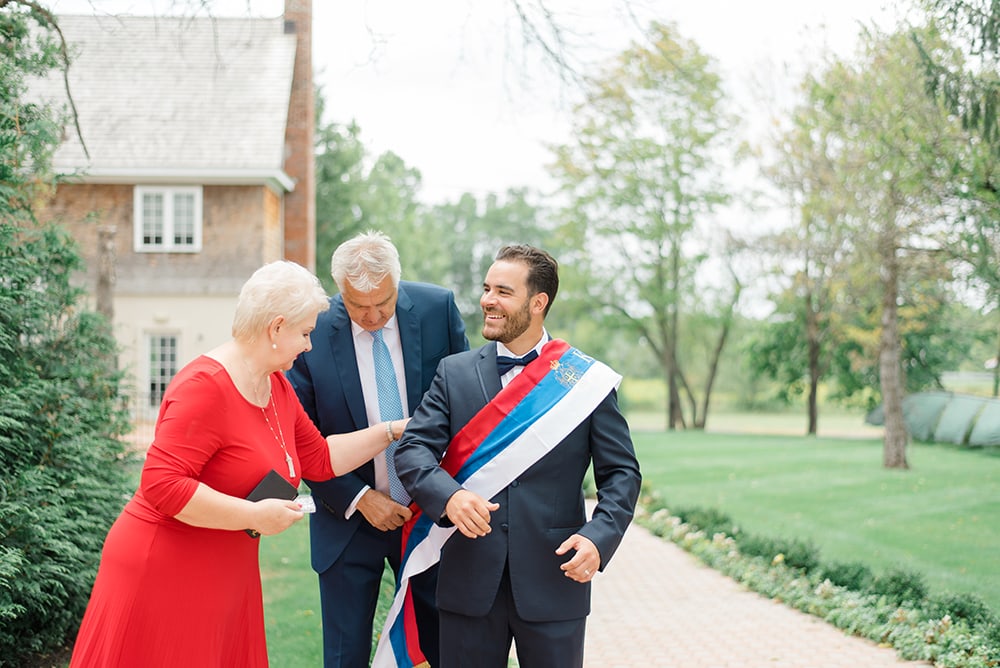 Stone House was actually not our original venue. Originally, we chose the Coach House at the Ryland Inn, but we had to postpone our May 23, 2020, Ryland wedding. When we did not see progress with the indoor dining restrictions in July, we reached out to Michelle from the Ryland Inn to see if there was availability at their sister venue, Stone House. She connected us with Carissa, the director of events at Stone House, and we set up a meeting to view the venue. Once we viewed, we decided to make the move and start replanning and readjusting. Carissa was a saint though the entire process and really worked with us on ensuring that our vision was executed! We were also lucky enough to be able to rent out the Kimblewick Cottage at the Ryland Inn for bridal prep. We were still able to have pictures taken at Ryland, as well as Stone House, which was special to us. The biggest hits at cocktail hour were the raw bar, suckling pig and Austin BBQ station. For starters, we were served Caesar salad along with a side of baked brie. For dinner, guests had a choice between halibut or filet. Dessert was really important to my mom, so in addition to the wedding cake we added desserts like a s’mores station, mini seasonal fall pies, a crepe station, an Italian pastry station, a cordial and espresso station, deep-fried Oreos and chocolate-chip cookies. To end the night, we hired Tony Boloney’s food truck to indulge our guests for midnight munchies. Guests were able to go up to the food truck an unlimited amount of times and were able to choose from their unique pizzas, subs and french fries.
I felt like a princess in it! I visited Castle Couture in September 2019 with my mom, sister, future sister-in-law and my future niece. I tried on about eight dresses, and it came down to two that I equally loved. But there was something different about this one—it captured my personality perfectly. I felt amazing in it, and it was unlike other gowns I had seen. I wish I could wear it again. 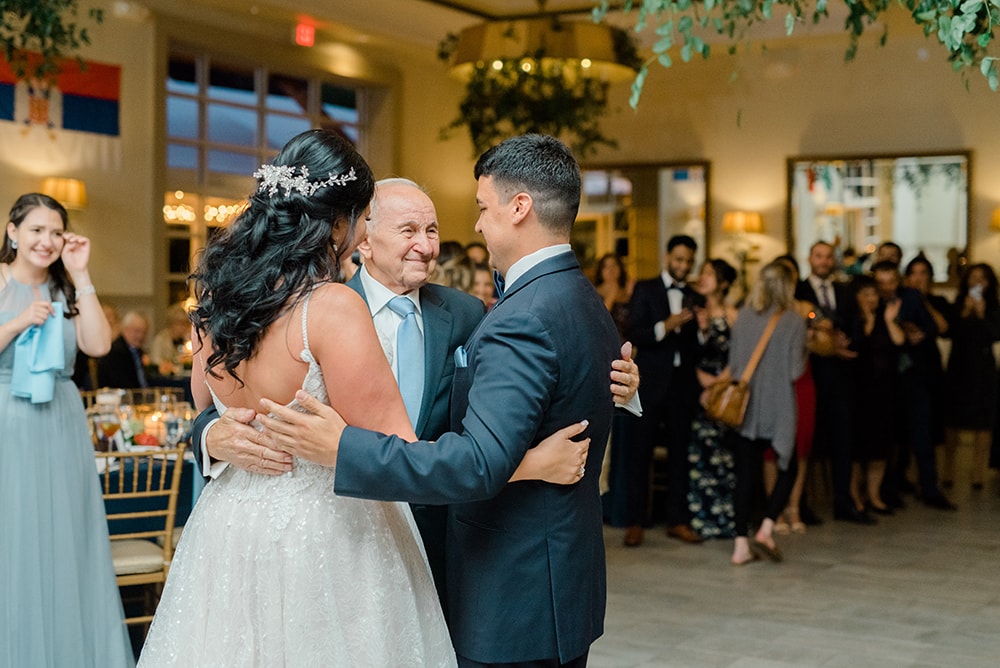 One of my favorite moments was when we surprised my 88-year-old grandfather by asking him to dance with me halfway through my father-daughter dance with my dad. My mom and I had planned this a couple of weeks before, and figured out the best moment in the song to glide over to my grandfather and pull him in. My dad loved the idea, too. My grandfather had the biggest grin on his face. We went to the middle of the dance floor and began to dance. I couldn’t stop crying and he was at a complete loss of words. I will never forget the look on his face. He had the biggest smile and eyes filled with tears. At one point, he spotted Joe and extended his hand out to Joe. Joe walked over and the three of us finished the dance together. It was an extremely emotional and special moment for me.
The flowers! More specifically, the greenery that was hanging from the nine chandeliers inside the ballroom. It reimagined the entire room and it was probably one of my favorite aspects of the ballroom. I cannot say enough good things about our florist, Jardiniere Fine Flowers. Our hair dresser got locked out of her car the morning of the wedding (she lives over an hour and a half away.) She was very late but she worked her magic and did a phenomenal job on me and my bridesmaids! We were a bit rushed at the end of pictures because of timing, so we had to get on the party bus right away and I ended up forgetting my custom-made caplet. I planned on wearing it inside of our church, in order to respect church etiquette and cover my shoulders and chest.
“Falling Like the Stars” by James Arthur. 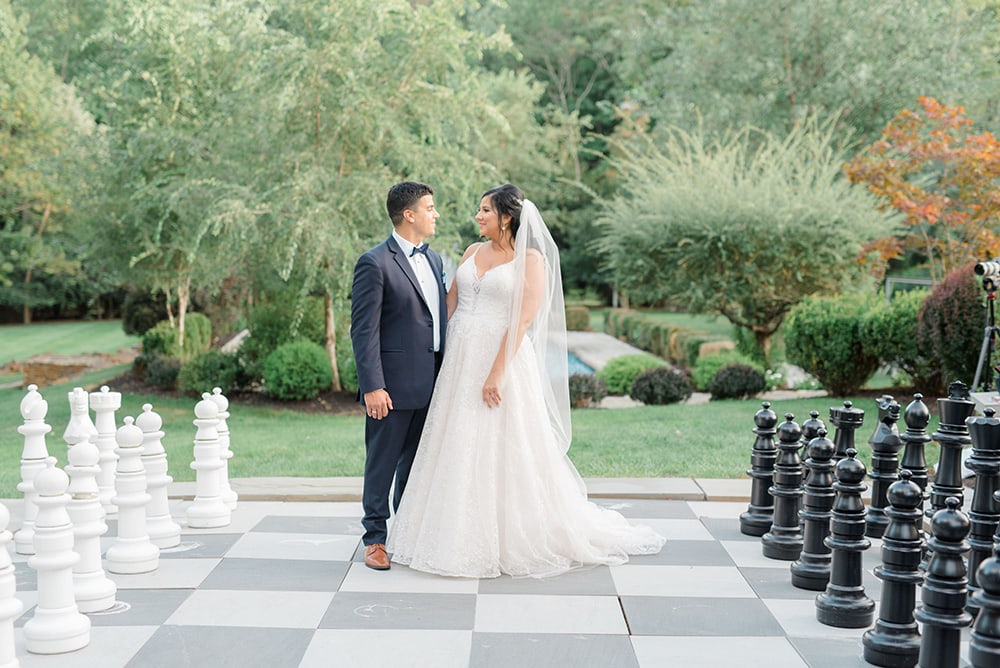 Be intentional with every moment at the cocktail hour and reception. The bridal prep, first look, pictures and the church ceremony went by at a normal pace and I was able to really relish in every moment of that. However, once we joined cocktail hour and the reception began, our night went by in the blink of an eye. You think you have time, but you really don’t. So organize your time and be intentional with how you spend it. 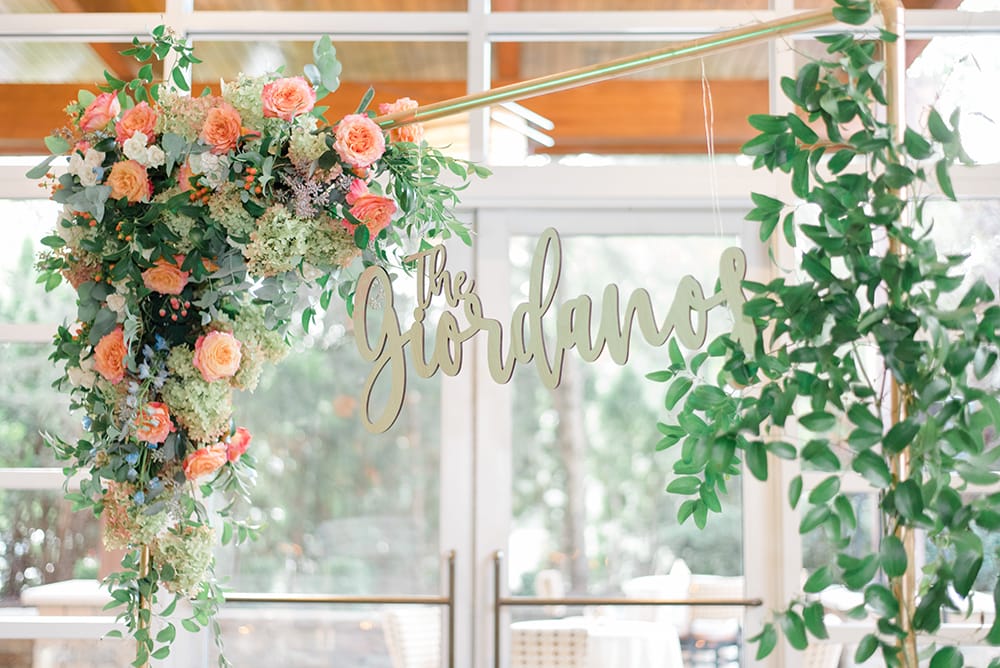 We decided to go to Spain, Portugal and the Canary Islands.

Spain, Portugal and the Canary Islands